Leading Tamil actress Shruti Haasan recently celebrated her 35th birthday, which saw many of her close friends from the industry come together, including her rumored boyfriend Santanu Hazarika. The two have of late been spotted together, with pictures of them going viral on social media. Shruti, who has nearly 16 million followers on her Instagram page, including a massive fan base on other social networking forums, often posts pictures and videos, while also engaging in fun Q&A sessions with fans.

Similarly, Shruti Haasan recently held a Q&A session on Instagram, with fans posing many queries, including one follower who asked her at what age she had gotten her belly button pierced. Taking to her Instagram Story feature, the Vedalam actress confidently replied back saying she had gotten her navel piercing done when she was 19, with her statement receiving a huge response from fans. Screenshots of her response have been trending, with many complimenting her for lifestyle choices. Check it out below: 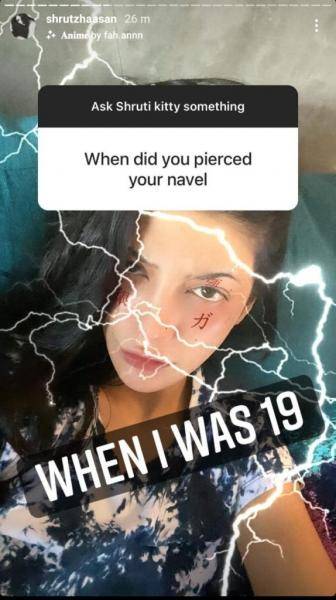 On the work front, Shruti Haasan, who was last seen on the big screen in Ravi Teja's Krack in Telugu, which hit theatres this Sankranthi, has promising projects lined up next. She also made her debut recently on the digital space in Netflix's Telugu anthology, Pitta Kathalu, in the xLife segment directed by Mahanati fame Nag Ashwin. Sheuti's upcoming films include Vakeel Saab opposite 'Power Star' Pawan Kalyan, which is a remake of the Amitabh Bachchan-Taapsee Pannu starrer Pink, including Laabam in Tamil opposite 'Makkal Selvan' Vijay Sethupathi. She was also recently announced to be playing a big role in Baahubali actor Prabhas' next pan-Indian film, Salaar, which rolled into production sometime back under Prashanth Neel’s direction, who is known for his KGF films and is being produced by Hombale Films.