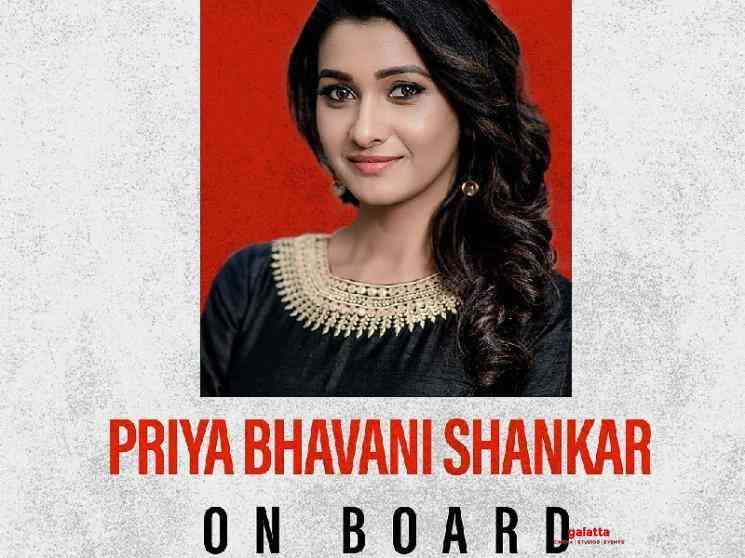 The young and beautiful Priya Bhavani Shankar is celebrating her birthday today (December 31) and wishes have been pouring in from various quarters. In a short span of time, Priya Bhavani Shankar has turned out to be one of the most sought after actresses in Tamil cinema and things have been going pretty well professionally for the talented actress. Priya was last seen in the Arun Vijay - Prasanna starrer Mafia: Chapter 1, directed by Karthick Naren. She has films like Kuruthi Aattam (Atharvaa), Oh Manapenne (Harish Kalyan), Bommai (SJ Suryah), and Kalathil Sandhippom (Jiiva - Arulnithi) waiting for release. Recently, Priya was signed to play the female lead in Ashok Selvan's untitled next, directed by Sumanth Radhakrishnan.

Marking Priya's birthday, one more new film of hers is officially announced. Yes! She would be acting as the female lead in Raghava Lawrence's upcoming action drama, Rudhran, which was officially announced earlier this year. Rudhran is produced by S Kathiresan of Five Star Creations LLP who has already bankrolled movies like Polladhavan, Aadukalam, Jigarthanda, and more. According to the recent online reports, it is said that Kathiresan himself might direct the film, thereby making his directorial debut. An official word regarding the same is awaited.

Rudhran will have music scored by GV Prakash Kumar who is now in fine form with the success of Soorarai Pottru. It is going to be interesting and fresh to see Raghava Lawrence and Priya Bhavani Shankar share screen space together for the first time and let us see how the pairing clicks among the masses. The fans are congratulating Priya for bagging this exciting action entertainer. A solid team is coming together for making Rudhran and rest of the team members are expected to be announced in the coming days.

Apart from all these films, Priya also has the mega biggie, Indian 2, directed by Shankar. The Meyaadha Maan actress will be seen in an important role in this political drama that stars Ulaganayagan Kamal Haasan and Kajal Aggarwal in the lead roles. Siddharth, Rakul Preet Singh, Vivekh, Bobby Simha, Nedumudi Venu, and Delhi Ganesh are also a part of the film's cast. The next schedule of Indian 2 is expected to begin early next year. For now, check out the official announcement about Priya signing Raghava Lawrence's Rudhran here:

Happy Birthday @priya_Bshankar
All the best for all your projects including Rudhran. Happy to welcome you on board! pic.twitter.com/xmkMJ7LlTC