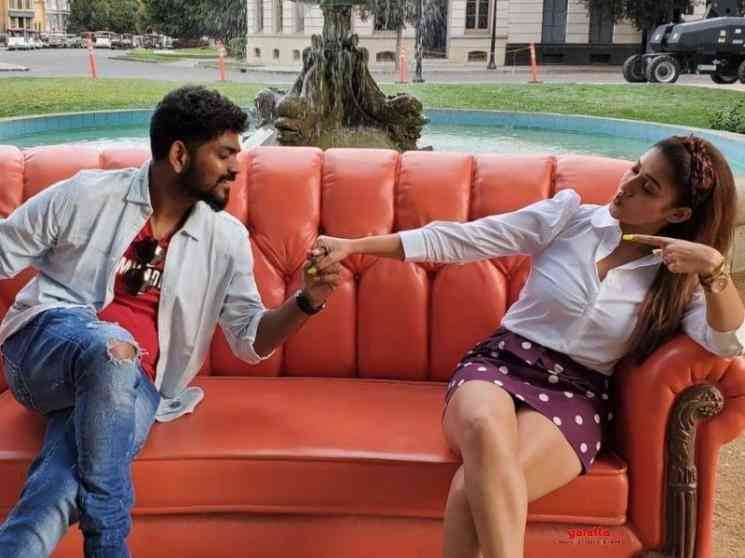 Actress Nayanthara had been filming 'Superstar' Rajinikanth's upcoming mass action family entertainer Annaatthe at the Ramoji Rao Film City in Hyderabad when the shoot was suspended indefinitely after 4 crew members tested positive for the novel coronavirus. With Rajinikanth testing negative for COVID-19 and isolating himself, Nayanthara has left Hyderabad with her director boyfriend Vignesh Shivan, who were seen walking hand-in-hand in the city's airport earlier this week. Having said that, Vignesh Shivan had taken to his Instagram page to surprise fans and drop a couple of new photos with Nayanthara from their Christmas holidays.

Nayanthara is seen on a sofa popularly known as the Friends Sofa while wearing a polka dot purple short skirt, which she complimented with a white shirt and sneakers, who is being wooed in one of the pictures by Vignesh Shivan. In another photo, the couple are seen posing in front of the renowned Central Perk coffee shop where a majority of the stories take place on the Friends sitcom. Based on the photos, it looks like Nayanthara and Vignesh Shivan are holidaying in Singapore where a special Central Perk Café has been put up. Sharing the pictures, Vignesh Shivan wrote, "Merry Christmas dearest people may there be happiness in abundance in all our lives ! Wishing the best wit a lotta positivity & Good will." In another photo, he wrote, "Let there be love & light Wishing everyone a happy Christmas:) #spreadpositivity #spreadhappiness#merrychristmas #happychristmas #happyholidays".

On the work front, Nayanthara is attached to a number of promising projects apart from Rajinikanth's Annaatthe among which include the Malayalam film Nizhal, which has her cast opposite Kunchako Boban. In Tamil, she will be seen in the upcoming crime thriller film Netrikann, which has been directed by Milind Rau of Aval fame and produced by Vignesh Shivan's Rowdy Pictures banner. Both Nayanthara and Vignesh Shivan will also be presenting debut director Arun Matheswaran's film, Rocky that stars Taramani fame Vasanth Ravi and veteran director Bharathiraja in the lead roles. Furthermore, they recently made a big announcement that they had acquired the theatrical distribution rights of Koozhangkal directed by debutant PS Vinoth Raj, with plans for it to be sent to international film festivals around the world.

Fans are also excited for Nayanthara and Vignesh Shivan teaming up after their Naanum Rowdydhaan for the upcoming Tamil film Kaathuvaakula Rendu Kaadhal, which will see 'Makkal Selvan' Vijay Sethupathi once again in the lead role. Touted to be a fun romantic comedy, the film will also includes Samantha Akkineni, with Anirudh Ravichander scoring the music and is being produced by Lalit Kumar's 7 Screen Studios in association with Vignesh Shivan's Rowdy Pictures banner. Below are the picture from Nayanthara and Vignesh Shivan's Christmas celebrations: