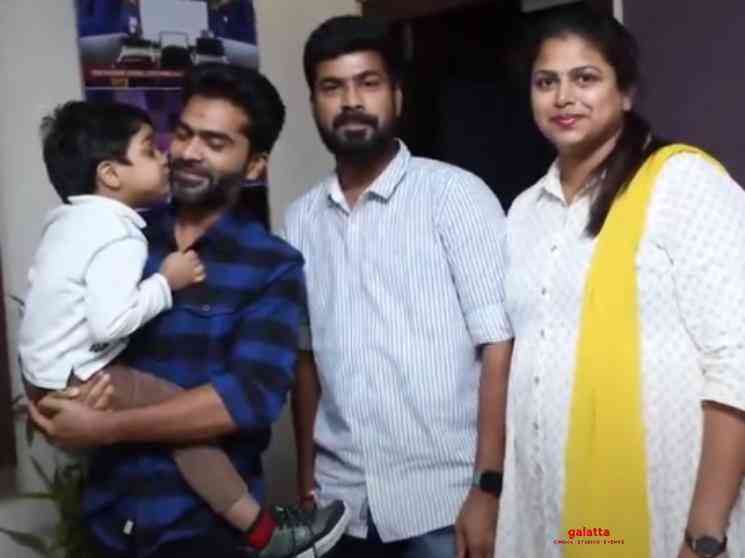 An actor who exudes swag on the screen each time he appears, Silambarasan TR is all set to be busy in the days ahead with several big films lined up ahead. STR, who is currently in Sabarimala on his pilgrimage, had wrapped up filming for his Pongal 2021 release Eeswaran under Susienthiran's direction in a span of less than 45 days, with the film's music and trailer announced to be releasing soon in the days ahead. Now, Simbu's manager Hariharan Gajendran, who also is an ardent fan of the actor, has taken to his Twitter page to share a video of presenting him a special photo album on the occasion of his birthday. Hariharan along with his wife were hosted by the swashbuckling star, who also is seen in the video having a fun time with their son.

STR's fans have known Hariharan to be the go-to man over the years for anything in regard to the actor and actively informs fans by dropping updates and information related to his upcoming projects. A big fan himself of Simbu, Hariharan had been sharing videos and pictures of the actor's intense physical workouts earlier this year, which has since resulted in a stunning transformation, leaving fans in awe. Silambarasan TR, who is looking years younger once again and in a slim avatar, has since been actively taking part in film shoots, while also making a comeback to social media.

On the film front, Simbu will be resuming shooting for director Venkat Prabhu's mass masala political entertainer Maanaadu from January once he returns from his Sabarimala journey. He will be seen playing the role of a Muslim for the first time in his career, with two posters from the film unveiled so far receiving a stellar feedback. In that light, STR's much-awaited remake of the Kannada film Mufti, was announced to be titled as Pathu Thala by Studio Green, and will see the actor as a gangster based out of the southern parts of Tamil Nadu, with Gautham Karthik playing an undercover cop and under Sillunu Oru Kaadhal fame Krishna's direction. Likewise, actor-producer Padam Kumar of Paava Kadhaigal fame recently confirmed that Silambarasan will be doing Poda Podi 2, which will include a completely new premise, with the exception of a small connection with the first film.

Watch Simbu's latest video with his manager Hariharan and his family below: