EXCITING NEWS: Laila to make her comeback in Tamil cinema after 16 years with this biggie!

Actress Laila who is known for playing fun-loving and vibrant characters in various films will be making her comeback in Tamil cinema with a biggie and the update has garnered attention on social media. Laila was last seen in the 2006 Ajith Kumar starrer Paramasivan and after a long gap of 16 years, she will be making her comeback with the upcoming Karthi film, Sardar. Karthi is currently acting in Sardar which is directed by PS Mithran, known for directing Vishal's Irumbu Thirai and Sivakarthikeyan's Hero. Laila is currently shooting for her portions and the much-loved actress is said to have got a meaty role to play.

Details regarding her character are yet to be known and we will keep you posted about it. George C Williams, the cinematographer of Sardar, took to his official Instagram page to confirm Laila's presence in the film. Sharing a picture from the sets of Sardar, George wrote, "Early morning seaside shoots @laila_laughs @psmithran". Laila, who had a special place in the hearts of the Tamil audience during the 2000s, is best known for her performance in films like Dheena, Dhill, Nandha, Unnai Ninaithu, Pithamagan, Ullam Ketkumae, and Kanda Naal Mudhal. Get ready to witness the adorable actress once again through Karthi's Sardar.

Talking about Sardar, the film has Karthi in dual roles, one as a police officer, and the other as an ageing convict. Produced by S Lakshman Kumar under the banner of Prince Pictures, Sardar features Raashi Khanna and Karnan fame Rajisha Vijayan as the female leads. GV Prakash Kumar is the music composer of this flick and his work is indeed going to be one of the main assets of the movie. The makers are yet to finalize the release plans of Sardar and more details are expected to be known in the next few weeks. Stay tuned to this space for more exciting updates. 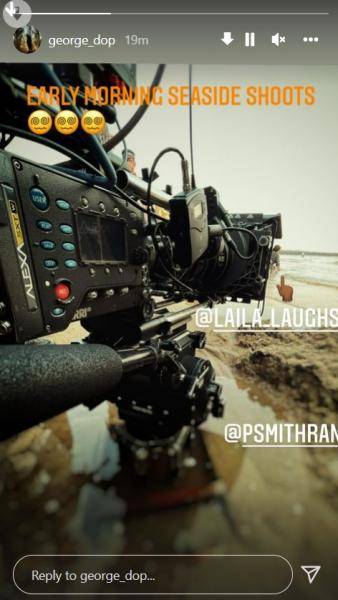 Vijay to play a Sardar?

Trisha to horrify her fans!

Thalapathy Vijay's BEAST - new action glimpse is out and this looks electrifying! Check Out!

Alya Manasa and Sanjeev become parents to a baby boy | wishes pour in from fans!