One film that has been debated extensively among fans across the country, Thalaivi, the upcoming ambitious biopic on former Tamil Nadu Chief Minister J. Jayalalithaa, will see National Award-winning actress Kangana Ranaut portraying the late stateswoman under A. L. Vijay's direction. Made as a Tamil-Hindi bilingual and dubbed in several languages, there have been rumours of late regarding the release of Thalaivi, which Kangana has now outright dismissed. Taking to her Instagram Stories, the Queen actress said, "No release date has been finalised for #Thalaivi yet, please refrain from rumours, we will release the film as and when cinemas open all across the country... thanks." 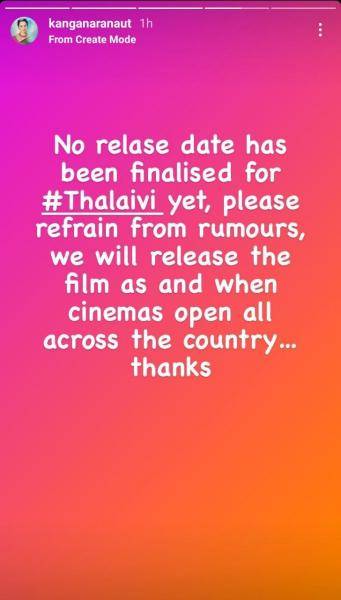 Jointly produced by Vishnu Vardhan Induri and Shailesh R Singh under the Vibri Media banner, a power-packed trailer for Thalaivi was released earlier in March on the occasion of Kangana's birthday, which has since received a staggering response for the drama and the visuals that were teased. Thalaivi is one of the biggest projects awaiting its release and has been delayed due to the pandemic. It is clear the team is looking to bring the film out in theatres and are looking for a feasible time for the covid-19 situation to subside considering it is a pan-Indian venture.

Apart from Kangana, Thalaivi has Arvind Swami playing legendary actor and late Tamil Nadu Chief Minister MG Ramachandran, popularly known among the masses and the classes as MGR. Thalaivi will also feature several other notable names such as Prakash Raj, Jisshu Sengupta, Poorna, Madhoo, Bhagyashree in pivotal roles, with music composed by GV Prakash, while legendary writer KV Vijayendra Prasad has penned the film's screenplay. The film will trace the life journey of Jayalalithaa from cinema to her entry in politics, while also giving us extended glimpses at iconic leaders like MGR and several other notable political names in Tamil Nadu.

Vijay Sethupathi's breaking statement about appearing in The Family Man 3 - Check out!