After a brief hiatus, Ulaganayagan Kamal Haasan will be returning to cinema as an actor with Vikram which has got huge expectations among the fans. Vikram is touted to be an action-packed commercial entertainer that will prove to be an exciting watch for the audience. The movie is directed by the young and promising Lokesh Kanagaraj who is known for his works like Maanagaram, Kaithi, and Master. Vikram is an exciting film in all aspects, especially in the star cast, as the film boasts of several big names. Makkal Selvan Vijay Sethupathi and Fahadh Faasil would also be seen playing the lead roles in this film and it is going to be a visual treat for the fans to witness the star performers act alongside a legend like Kamal Haasan.

When there are three powerhouse actors to lead the film, there is no space for second thoughts. Apart from the leads, the film also has several other talented actors like Kalidas Jayaram, Narain, Shivani Narayanan, VJ Maheshwari, Myna Nandhini, who will be seen in supporting roles. Produced by Kamal Haasan's Raaj Kamal Films International, the film has music composed by rockstar Anirudh Ravichander and cinematography by Girish Gangadharan of Sarkar and Angamaly Diaries fame. Philomin Raj is the editor of the film, while the National-award winning duo, Anbariv will be choreographing the stunts.

Meanwhile, the latest update on Vikram is that the second schedule of the shoot kickstarted recently with the central cast of the film. Logi, one of the associate directors of Lokesh Kanagaraj, who worked on the lyric video of the viral hit number, 'Kutty Story' (Master), took to his official Instagram page to reveal the beginning of the second schedule. The second schedule of Vikram, which began yesterday (September 18) is expected to go on for the next few days in the city and the makers are expected to shoot a few important talkie portions in this schedule. Check out the update here: 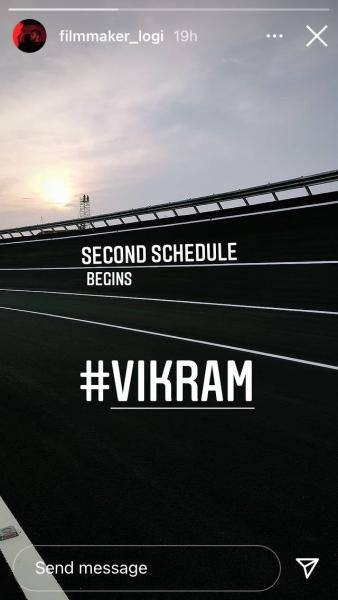