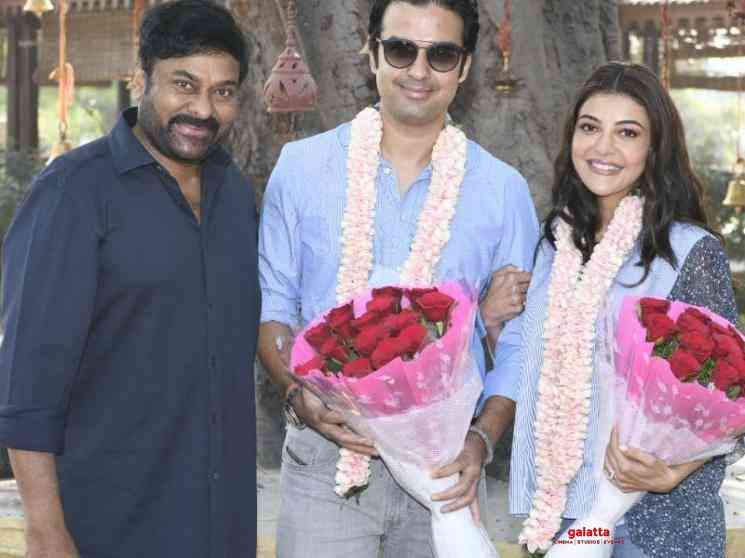 Earlier this morning (December 15), Kajal Aggarwal joined the sets of her upcoming film, Acharya that stars Megastar Chiranjeevi in the lead role. Kajal recently got married to Gautam Kitchlu and their wedding became a sensational topic on social media. Wishes poured in for the couple from several quarters. Gautam was seen accompanying Kajal at the sets of Acharya and the couple was given a very warm and sweet welcome. Chiranjeevi and the team of Acharya made the newlywed couple cut cake and celebrate the moment. The pictures are doing good rounds on social media. Chiranjeevi wished Kajal Aggarwal and Gautam Kitchlu on their marriage.

After the small celebration event, Kajal started to shoot for the film. The current schedule of Acharya is happening at Hyderabad and the team is executing the shoot as per the Covid-19 norms. Acharya is an action entertainer that is directed by blockbuster filmmaker Koratala Siva and produced by Konidela Production Company in association with Matinee Entertainments. The fans have got huge expectations on this movie which is being shot on a grand scale with high production values. Ram Charan is touted to play an important role in the film and if it happens to be true, then the fans are going to be super excited to watch the film in the theatres.

Acharya will have music scored by Mani Sharma, cinematography by 24, and Petta fame Tirru, art direction by Suresh Selvarajan and editing by Navin Nooli. This highly anticipated biggie is scheduled to release in the second quarter of next year.

Kajal Aggarwal, on the other hand, has several exciting projects in her pipeline. She is playing the female lead in director Shankar's magnum opus, Indian 2 that stars Kamal Haasan in the lead role. The fans are super excited and eager to witness the Indian Thatha after a long gap of 25 years and Kajal is said to have got a very significant role in the film. Apart from Indian 2, Kajal Aggarwal has Paris Paris which is delayed due to several production-related issues. Paris Paris is the official Tamil remake of Kangana Ranaut's Queen and it is directed by Ramesh Aravind. The much-loved actress had recently signed her next Tamil film with director Deekay of Yaamirukka Bayamey and Kavalai Vendam fame. For now, check out the latest trending pictures from the sets of Chiranjeevi's Acharya here: