The sixth edition of Bigg Boss Tamil is all set to begin this Sunday, October 9, and the fans are eagerly looking forward to the first episode which will introduce us to the contestants of this edition. Several exciting names are said to be on board for this season which will begin on the said date amidst huge expectations. The show will be aired on Vijay TV and will be available to stream on the Disney Hotstar platform as well. Interestingly, the OTT version will have a 24-hour live feed where the audiences can tune into the show at any time of the day to see what the contestants are doing.

This pattern came into effect with Bigg Boss Ultimate and it is now all set to be incorporated into the sixth edition as well. Those who want to watch the edited 1 hour version of the show, can catch it on television on weekdays from 10 PM - 11 PM. The speculated list of contestants of Bigg Boss 6 Tamil has already started to do rounds on social media and there are some interesting names including the likes of VJ Maheswari, Myna Nandhini, ADK, GP Muthu, and others. Popular dance choreographer Robert Master is also a part of the speculated contestants and that being said, the man himself has indirectly confirmed his participation.

Yes! The 4-day quarantine period for the contestants of Bigg Boss Tamil: Season 6 has begun and the participants are currently staying at a leading star hotel in Chennai. Earlier today (Oct 5), Robert Master took to his official Instagram page to post a picture of him from his hotel room and the picture instantly grabbed the attention of the fans. This more or less confirms us that Robert Master is a part of Bigg Boss Tamil: Season 6 and we will get an official confirmation on the same on Sunday. However, Robert Master deleted the story from his page, eventually. 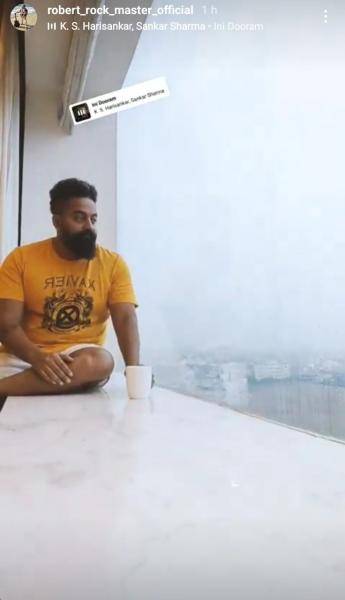 SURPRISE - the first visual promo teaser of Bigg Boss Tamil: Season 6 is out | Watch it here

Khushbu Sundar issues a clarification about being a part of 'Thalapathy' Vijay's Varisu! Official statement!

Exciting news for Conjuring fans - Valak is back | Here's the latest massive update for The Nun 2!

Jayam Ravi's reaction after 'Superstar' Rajinikanth's review of Ponniyin Selvan - Check out what he has to say!