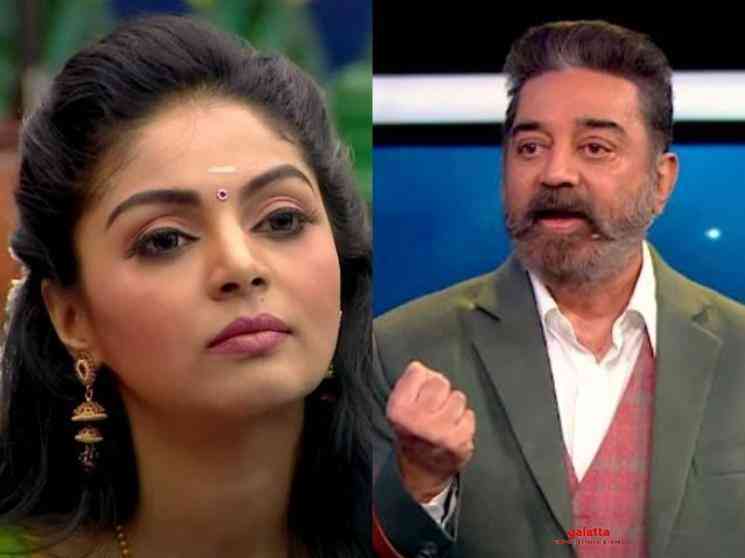 The smash hit Tamil reality TV show, Bigg Boss, which began its fourth season has witnessed a sensational start, with stellar TRP ratings for Vijay TV and electrifying streaming views for Hotstar. Being hosted by Kamal Haasan once again after three successful seasons, viewers have already watched many memorable incidents transpire on Bigg Boss Tamil season 4 to date. So far, Rekha Harris is the only contestant to have been eliminated from the show, with all sights now set on who among the remaining contestants will be shown the exit door. The contestants now on the show are Ramya Pandian, Rio Raj, Shivani Narayanan, Samyuktha Karthik, Gabriella, Aajeedh, Balaji Murugadoss, Som Shekhar, Suresh Chakravarthy, Aranthangi Nisha, Anitha Sampath, Sanam Shetty, Jithan Ramesh, Aari, singer Velmurugan and the first wildcard entry VJ Archana Chandhoke.

In the second Bigg Boss Tamil season 4 promo for Saturday released by Vijay TV, we see host Kamal Haasan addressing the contestants and informing the viewers that everyone knows the issue he is going to speak about. Kamal says that violence is wrong and conducts a vote on who all think that Sanam Shetty's angry outburst towards Suresh Chakravarthy during a task earlier this week was justified and fair. The Bigg Boss host then adds that he has doubts about Sanam's angry reaction being genuine, hinting that it was something she had wanted to do for a while now. Sanam responds saying NO, but Kamal interjects and points to Velmurugan. Velmurugan says that Sanam had hinted that if Suresh came in her way, she would not pay heed to his age. Kamal then follows Velmurugan's statement and says that Sanam saying she is taking age into consideration alone indirectly points to her etiquette.

This latest promo clearly shows that Kamal Haasan is looking to sort out the ugly incident that had taken place between Sanam Shetty and Suresh Chakravarthy earlier in the week. Sanam's words to Suresh came under huge criticism on social media, with fans calling her to be disrespectful towards a person who is elder to her by many years. Kamal too in the promo is seen stepping up for that precise reason and we can expect a serious turnabout during the episode later tonight.