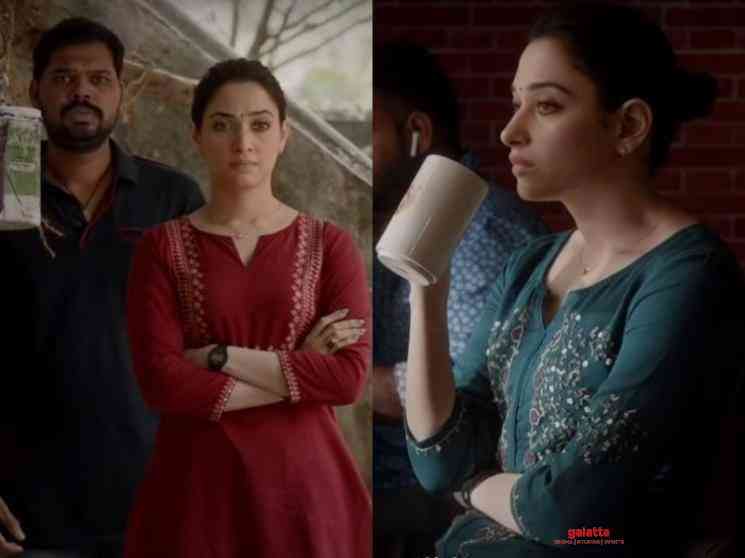 Actress Tamannaah has been upbeat post beating COVID-19 a few days back and revealed the teaser for her first Tamil web series, November Story, coming out under the Disney+ Hotstar Specials. A women-centric show, the makers released an intense and thrilling teaser for November Story on late Friday evening, which revolves around the relationship between a young woman named Anuradha played by Tamannaah and GM Kumar, who is starring in the role of her father.

The November Story teaser is an impressive one right from the get-go and shows the thrills that fans can expect when it comes out on Disney+ Hotstar. Based on the teaser, Tamannaah's father is revealed to be playing the role of one of the best crime novel writers in India. The intensity scales up after an eerie murder takes place inside Tamannaah's house. It can be assumed that the story will primarily revolve around how she goes on to solve the mystery behind the murder, including the fate of her father, which are a few major suspense elements in the series.

Directed by Ram Subramanian, November Story has been produced by the Vikatan Group and will be premiering on Disney+ Hotstar. Apart from Tamannaah and GM Kumar, the series also has Vivek Prasanna, Pasupathy among others in pivotal characters, with cinematography by LKG and Oh My Kadavule fame Vidhu Ayyanna.

During the virtual press meet for the November Story web series, Tamannaah said, "I think people have turned to entertainment for comfort more than ever before. Kollywood fans have been patiently waiting for an announcement like this - which promises them world-class Tamil entertainment at the touch of a button. My show November Story is a strong female-oriented narrative that gave me an opportunity to play around with the character." The popular South Indian actress also stated the series will be one of her best works. "I'm quite excited about the launch of this series. The screenplay and the execution are too good that I would say it as one of my best works", she added.

Apart from November Story, Tamannaah is also attached to four projects in Telugu namely, That Is Mahalakshmi (remake of Queen), Seetimaarr, Gurthunda Seethakalam (remake of Love Mocktail), which are in different stages of production, while also being recently announced to be reprising Tabu's role in the Andhadhun remake, alongside Nithiin and Nabha Natesh.