The hit Tamil reality show, Bigg Boss, has once again turned out to be an astounding success in its fourth season as it nears the finish line in crowning yet another winner. Being telecast on Vijay TV and streamed on Hotstar, the 'Ulaganayagan' Kamal Haasan-hosted Bigg Boss Tamil season 4 has completed three months, with 11 contestant evictions witnessed among whom include  Samyuktha Karthik, Sanam Shetty, Jithan Ramesh, Velmurugan, Rekha Harris, Aranthangi Nisha, Anitha Sampath, Suresh Chakravarthy, Aajeedh and the wildcard entrants Archana and Suchithra. As of now, the stakes are high among the remaining contestants in an attempt to try to reach the top of the ladder to take home the title as Aari, Som Shekhar, Rio Raj, Ramya Pandian, Balaji Murugadoss, Shivani Narayanan and Gabriella Charlton continue to push themselves, especially in the Ticket to Finale challenge that has been ongoing on Bigg Boss 4 over the past few days.

With the Ticket to Finale challenge ongoing over the past few days and the contestants giving it their all to avail a direct entry into the Bigg Boss Tamil season 4 finals, it is being reported that Som Shekhar has emerged as the winner in the final task. Furthermore, it is also being said that Ramya Pandian and Shivani Narayanan were seen to be the last two who survived the task, with footage from Friday's Bigg Boss 4 episode going viral on social media. The visuals of Ramya and Shivani holding on from letting go of the challenge put forth to them in the final Ticket to Finale task shows both the contestants getting emotional as the 'Singappenney' song from the 'Thalapathy' Vijay starrer Bigil plays on.

As known already, only the winner of the Ticket to Finale task will be getting a direct entry into the Bigg Boss 4 finale, while also avoiding eviction. As Som is set to make an entry into the Bigg Boss 4 finale, Ramya Pandian and Shivani Narayanan don't stand a big chance, but have been receiving strong support from fans online. Many have tweeted that both of them performed well during the task, with celebrities also extending their support. Likewise, Ramya's brother Parasu Pandian took to his Instagram page and posted a picture of himself watching his sister’s performance during the task, who on the TV is at that moment shown to be quite emotional. Parasu posted the picture along with the caption, "Idhu Podhum Nee already Jeichta Maara", while also thanking Bigg Boss for playing the song and also complimenting Shivani for her strong will. He has also posted an Instagram story, which has the song playing, with screengrabs of both contestants, including the other housemates, while adding the text "Cup Uh Venaam Title Venaam Idhupodhum Haters, Idhellam Neenga Nenachikooda Paakamudiyadhu". Check out Parasu's Instagram post and story below: 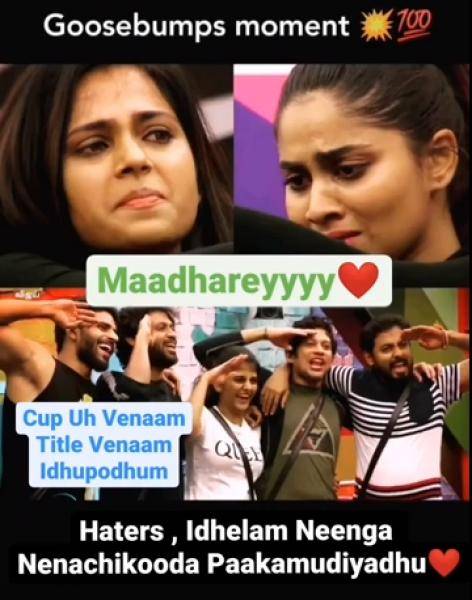 VK Sasikala to be released on Jan 27th?

Jadeja and Gill prop up India despite Steve Smith's century!