One of the biggest names to come out of the ongoing Bigg Boss Tamil season 4 was popular newsreader-actress Anitha Sampath. She had suffered an unexpected shock after her Bigg Boss exit as her father passed away on December 29, 2020. Post her eviction from the show, Anitha who reunited with her family, was waiting for her father to return from his trip to Shirdi. However, she and the people in Tamil Nadu were shocked to hear about his sudden demise during his return journey, leaving her family heartbroken. Anitha had also recently revealed that she had last seen her father before she went into quarantine for Bigg Boss 4.

An outspoken personality in Tamil Nadu, Anitha Sampath is known to be straightforward in her words and views and has often taken to her social media pages to convey her views on several topics and issues. Now, she has shared a few screenshots of the messages she has received after her exit from Bigg Boss Tamil season 4. Addressing one fan who said that he liked her during her stint on Bigg Boss 4 the most, Anitha shared the screenshot of his message and said that she wasn't able to tolerate the strategies being implemented by the other contestants. She also spoke about how she gave a brush to Aari after a small fight as a gift, which was telecast, but Aari presenting Balaji with a ball was not shown on TV.

Sharing one more screenshot of another fan's heartfelt words, Anitha replied saying that the positive messages coming her way are leaving her moved. She added that she never made fun of Aari behind his back, while informing that she is a person who will convey her thoughts and views upfront to a person's face. She also stated that Aari and Sanam Shetty are good friends, while adding that Bigg Boss is a game and that mistakes tend to happen in stressful situations, which can get one upset.

Check out Anitha's statements in the screenshots below: 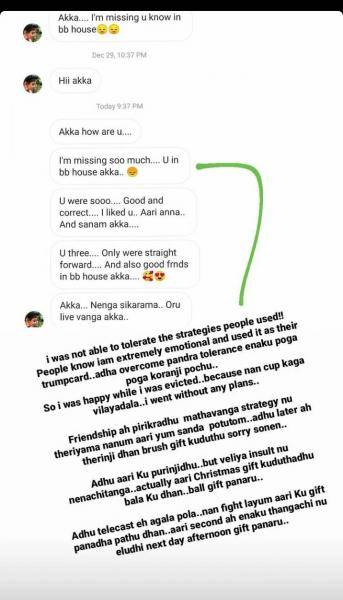 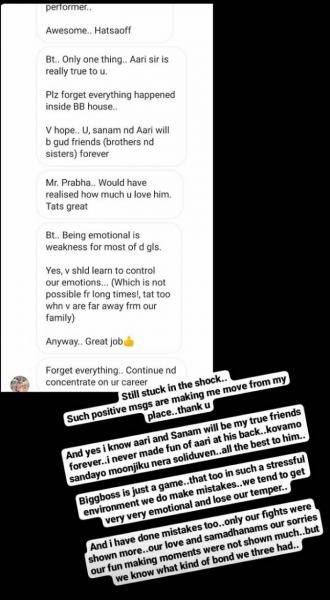