"This is not our baby" - Bharathi Kannamma actress Farina's husband lashes out at fake news!

Popular Tamil television actress and host Farina Azad and her husband Rahman Ubaith recently welcomed their first child, a baby boy. Best known among fans for playing the role of Venba on the hit Vijay Television serial Bharathi Kannamma, Farina shared the joyous news on Instagram, with wishes pouring in from celebrities and fans. Having said that, the couple were in for a shock when a few YouTube channels shared photos and videos of another baby while stating the infant to be their child.

Dismayed by the news, Rahman took the issue head on and commented on the video informing followers not to believe the news that was being shared by those YouTube channels. He added that he along with his wife Farina would make all announcements regarding their child, while also issuing a strong warning to the publishers of the video to take it down. Rahman commented: "Hi This is Rahman, this is not our baby. please don’t share such fake things. If you don’t remove this fake video, I will take necessary action. And subscribers please don’t share any such pictures of videos." He then took a screenshot of his comment on the video and put it up on his Instagram Story with the text: "Don’t believe such youtube videos until we share." Below is the screenshot: 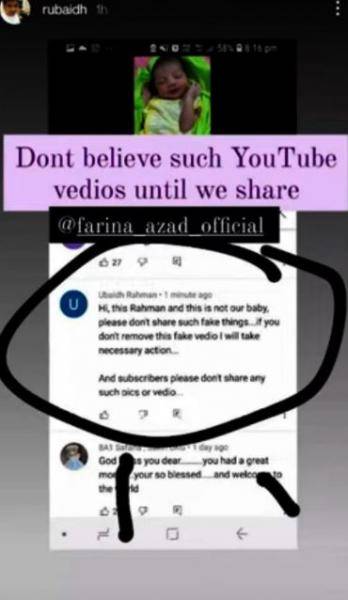 Farina and Ubaidh Rahman tied the knot on October 21, 2017 in Chennai. The actress had earlier this year announced that she would be taking a break from work and would return to Bharathi Kannamma after the birth of her child. Prior to Bharathi Kannamma, Farina appeared as a VJ in the early stages of her career after which she was seen in the Colors TV show Thari and Nachiyarpuram on Zee Tamil.