WOW: Did you know that Asin was the first choice to play Malar character in Premam?

Director Alphonse Puthren of Neram and Premam fame recently answered various questions asked by the fans on his official Facebook page. One of the fans asked about Alphonse Puthren's strong influence on Tamil in his movies and also asked about the reason to make Malar's character, a Tamilian. Alphonse had a very interesting answer and his reply has now gone viral among the fans. Alphonse made a big revelation that he wanted Asin to play the character of Malar initially and also added that in the initial stages of scripting, Malar was a Malayalee character. Since he could not reach Asin, he gave up that idea and fine-tuned Malar's character, making her a Tamilian.

Later, we got to witness Sai Pallavi as Malar. Alphonse Puthren's reply read, "In the beginning when I wrote the script it was Malayalam. I wanted Asin to act in Malar's Malayalam version. The character was from Fort Kochi... I couldn't contact Asin. Nivin also tried. Then I gave up the idea and wrote it in Tamizh. This is in the beginning stage of the script. I studied in Ooty when I was too young and then did my film studies in Chennai. That is why the strong Tamizh connection". Wow! This revelation looks quite interesting, right?. Seeing Asin in the shoes of Malar would have been refreshing, but interestingly, we got to spot a sensational talent like Sai Pallavi. This reply from Alphonse has garnered good attention on social media.

On the directorial front, Alphonse Puthren is currently busy with the pre production works of his third film, Paattu. The film will feature the highly talented Fahadh Faasil and lady Superstar Nayanthara in the lead roles. Paattu will be a musical romantic drama and it will mark Alphonse Puthren's debut as a music director. The film has already got huge expectations among the film buffs. The shooting of Paattu is expected to begin when the Covid 19 situation comes under control in the country. For now, check out Alphonse Puthren's trending reply about the backstory of Malar's character here: 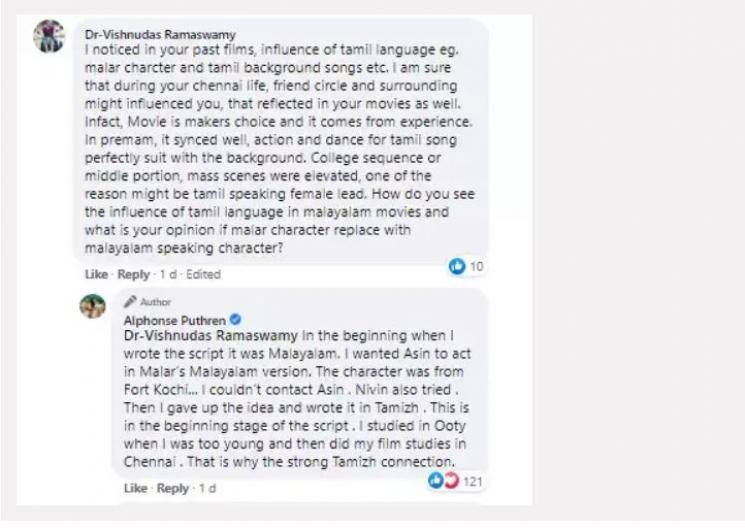 Important clarification on Keerthy Suresh's next film rumours - Check Out!

A.R.Rahman gets vaccinated for Covid 19 - shares picture on social media!