Ace director Mani Ratnam is currently in the process of filming his dream project, Ponniyin Selvan which has got huge expectations among the fans and film buffs. Ponniyin Selvan is being made as a two-part film and it is surely one of the most exciting films to watch out for. Ponniyin Selvan is a star-studded film that features a bundle of highly talented actors. Chiyaan Vikram, Jayam Ravi, Karthi, Trisha, and Aishwarya Rai Bachchan would be playing the lead roles, while the supporting cast includes Vikram Prabhu, Ashwin Kakumanu, Aishwarya Lekshmi, Jayaram, Prakash Raj, Nizhalgal Ravi, Mohan Raman, Rahman, Riyaz Khan, and others.

Meanwhile, one more actress has now officially confirmed her presence in Ponniyin Selvan. Yes! Actress Vinodhini Vaidyanathan, who is known for acting in movies like Engeyum Eppodhum, Aandavan Kattalai, Ratsasan, Game Over, Comali, and Soorarai Pottru, will be seen playing a pivotal character in Ponniyin Selvan. Vinodhini officially confirmed the news through her Instagram page. Details regarding her character are yet to be known and further details are awaited. Interestingly, Ponniyin Selvan will be Vinodhini's second film with Mani Ratnam after O Kaadhal Kanmani.

Around 70 percent of the film's shooting is over and the remaining portions will be completed when the Covid-19 situation comes under control in the country. Considering the fact that Ponniyin Selvan is a large scale film, it will involve more than 100 people on the set and hence the team will have to wait for a few more days for resuming production. Produced by Lyca Productions in association with Madras Talkies, the film has music composed by A.R.Rahman. It has been a long while since we saw Rahman composing for a historical film and on that aspect, Ponniyin Selvan is going to be a treat for the fans.

Ravi Varman has handled the cinematography, while the editing is done by Sreekar Prasad. The film's screenplay is written by Mani Ratnam, Elango Kumaravel, and Jayamohan. For now, check out Vinodhini Vaidyanathan's official Instagram post, confirming her presence in Ponniyin Selvan here: 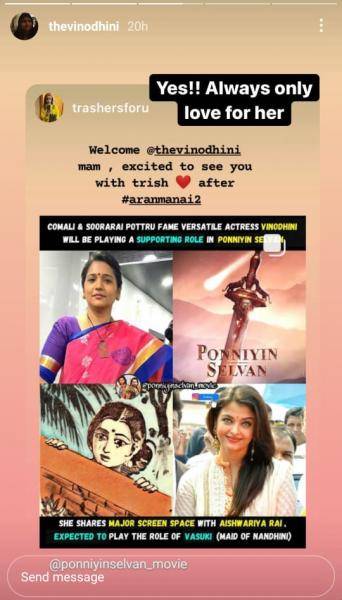