Anjana Rangan is one of the most popular video jockeys in Tamil and she has a very good fan following. Anjana's latest photoshoot pictures garnered the attention of the netizens and it went viral on social media. VJ Anjana is also someone who regularly engages her fans and followers through interctive sessions on Instagram. Having said that, Anjana had an interaction with her followers and asked them to pose their questions to her. During the session, Anjana answered several interesting questions and her answers have gone viral among the fans. One of the fans expressed his interest to see Anjana in the upcoming fifth season of Bigg Boss Tamil.

The fan's question read, "Participate in Bigg Boss 5 please. Wanna see u with Kamal sir and wanna see baby R in family week". However, Anjana said that she is not interested in participating in the show as she cannot separate from her son for a longer period of time. Anjana Rangan's reply read, "I can't be away from him for that long!". Well, Anjana has given a clear answer that she is not interested in Bigg Boss. The fifth season of Bigg Boss is expected to begin in the next two months and the fans are eagerly looking forward to it. The pre production works are said to be happening in full swing and the team is already in talks with several interesting names.

The first list of rumoured contestants was out on social media, a few weeks back, but we did not get an official clarity about it. Cook with Comali: Season 2's title winner - Kani Thiru, Pavithra Lakshmi, Sunita Gogoi, actor Nakkhul, Mansoor Ali Khan, were some of the names which were spotted in the speculated list of contestants, but we will have to wait for a few more weeks to get better clarity about it. We will also have to wait for some days to know if Kamal Haasan will continue as the host of the show for this season. The fourth season of Bigg Boss Tamil was a grand success among the audience and it served as a solid source of entertainment for the Tamil audience during the pandemic.

Actor Aari Arujunan was declared as the title winner of the fourth edition of Bigg Boss. For now, check out VJ Anjana Rangan's reply about participating in Bigg Boss Tamil: Season 5 here: 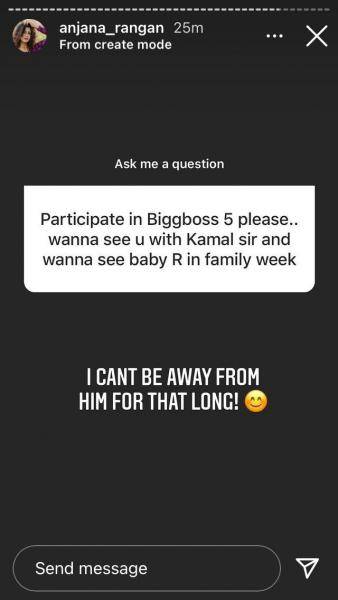