Prithviraj compares 'Thalapathy' Vijay with Amitabh Bachchan - check it out! 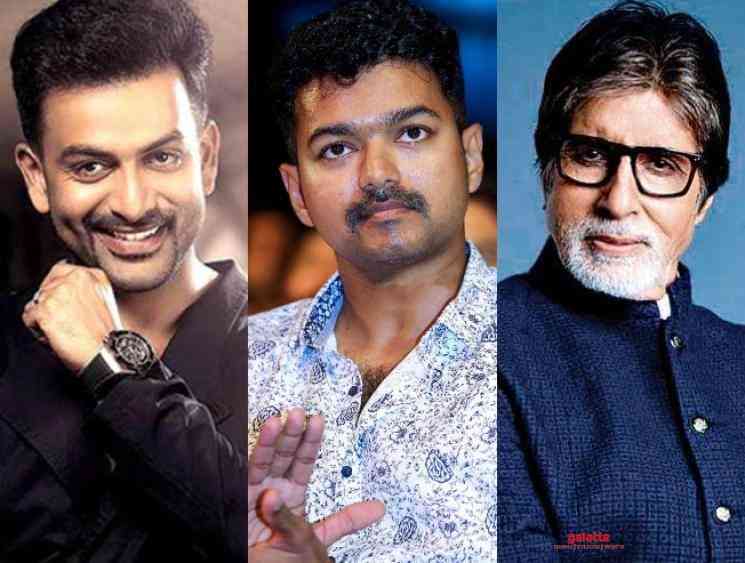 ‘Thalapathy’ Vijay has gone on to establish himself as a box office powerhouse over the course of his illustrious career with numerous blockbusters. The Tamil superstar, who was last seen in the action sports drama, Bigil, is at present working on his upcoming film, Master, which had its first look poster released earlier this week, as a New Year’s treat for fans. Meanwhile, popular Malayalam actor Prithviraj Sukumaran, who played the lead role in notable Tamil films like Mozhi, Abhiyum Naanum, Raavanan and Kaaviya Thalaivan, had recently during the fans meet of his latest film, Driving Licence, spoken in detail about Vijay’s phenomenal rise in cinema while also showering praises on the star over his careful decision-making skills when it came to choosing scripts to work on.

Speaking about Vijay, Prithviraj stated, “I’ve met Vijay sir on several occasions and we have spoken quite a lot. Easily, one of India’s biggest stars; and I don’t mean just in Tamil Nadu. In fact, Vijay sir has the ability to generate a huge revenue in India with his films. Every time a Vijay film comes out, the schematics in the industry begins to change - the belief that Tamil cinema is able to generate so much revenue, that is a big development. In a lot of ways, I think Vijay is an important figure in Tamil commercial cinema,”.

Prithviraj further added, “Vijay’s evolution over the years as a star and as an actor, I have been impressed by him so much with the films he chooses after careful thought and doing only limited ventures in a year while knowing his space and then designing his projects accordingly - that to me is very intelligent. And, when you see him in person, you know that there is that star charisma in him. Although he doesn’t speak much, you know there is a lot of star charisma and that was visible in a person like Amitabh Bachchan sir. Even if a person didn’t know who Amitabh Bachchan is, he could bring the entire room’s attention with his presence there. That trait is there in Vijay as well,”.

Watch Prithviraj speak about Vijay at the Driving Licence fans meet below: