Thalapathy 65 is now Beast and the film has got huge expectations among the fans and film buffs. The first look poster of Beast which released earlier this week created a sensational buzz on social media, and the fans were excited to see Vijay in a new look. The stylish first look poster hyped up the expectations and we are sure that the film will take a mega grand opening at the box office. The first schedule of Beast took place in Georgia where some of the important scenes featuring Vijay were shot. When the team was back in Chennai after wrapping up the first schedule, the second wave of Covid-19 was intense and severe in the state and hence, the shoot was temporarily halted.

After a patient wait for two months, the shoot of Beast is all set to resume. The second schedule of Beast will happen in Chennai and it will start off with a song shoot. The film's leading lady, Pooja Hegde took to her official Instagram page to share a new update on Beast. Ahead of the song shoot, Pooja seems to have taken part in the dance rehearsal, this morning (June 26). Sharing a picture of her from a dance studio, Pooja Hegde wrote, "Dance rehearsals begin... #Beast". The picture has gone viral among the fans and they are excited to see this development. If reports are to be believed, the song shoot will happen on July 1 and a grand set has been erected at a film studio in Chennai.

The shoot will happen as per the Covid-19 protocols, with less than 100 people on the spot. Post the song shoot, some important scenes featuring the lead cast will also be shot in this schedule. This song will be choreographed by Jani Master who is known for his highly energetic dance choreographies. Beast is directed by Nelson Dilipkumar of Kolamaavu Kokila fame and has music composed by Anirudh Ravichander. Produced by Sun Pictures, this film is tentatively scheduled to release for next year's Pongal festival. For now, check out Pooja Hegde's latest update on Beast here: 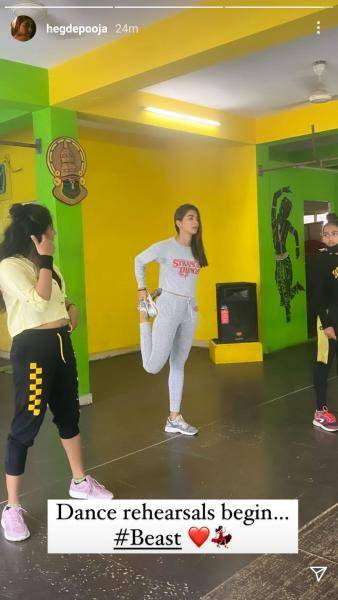 Check out the intriguing teaser of Bobby Simha's next Tamil film - Super Thrilling!