Pandian Stores is one of the most popular serials on Tamil television and it has a great fan following. The serial is airing on Vijay TV and it is one of the successful serials on the channel, attracting a solid amount of viewership. The serial which has crossed over 550 episodes, features Stalin Muthu, Sujitha Dhanush, Kumaran Thangarajan, Venkat Renganathan, Kaavya Arivumani, Hema Rajkumar, Saravanan Vickram, Deepika, in the lead roles. The serial's female lead, Chitra VJ died by suicide, in an unexpected turn of events, and she was replaced by Kaavya Arivumani. Though it took quite some time for the audience to accept Kaavya as Mullai, things look quite better now.

Kaavya Arivumani has managed to strike a chord with her performance as Mullai and the show is progressing well. Kaavya Arivumani has also earned a huge fan base through this serial and it has given her a big breakthrough. One of the unfortunate byproducts of becoming popular is the fake profiles and impersonations on social media. Kaavya Arivumani has also faced that and she took to her official Instagram page to make an important clarification regarding the same. It looks like someone has created a profile in the name of Kaavya Arivumani on the Josh app. Kaavya shared a screenshot of the profile and called it to be fake.

She also requested her followers and well wishers to block and report the profile. Kaavya Arivumani wrote, "Fake Fake. I'm not using this app. Block it. Fake. Swipe up and block!". This immediate clarification from Kaavya will now make people aware of the impersonators and this has turned out to be a timely warning for the uninformed. Check out the screenshot of Kaavya Arivumani's clarification here: 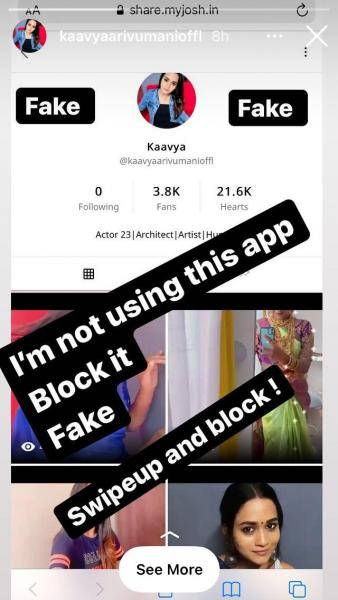 The much awaited announcement on Silambarasan TR's Maanaadu - Check out!

Good News: This much loved sensational singer is blessed with a baby boy!