This much loved Nadhaswaram serial actress onboard for Sun TV's superhit serial!

Magarasi is a popular Tamil television serial which is being aired on Sun TV. The serial, which has crossed over 413 episodes so far has got an overwhelming reception from the fans and it is one of the successfully running shows in the channel. The serial features SSR Aaryann, Mounika Devi, Sriranjini, Poovilangu Mohan, Ramji, Riyaz Khan, and others in the lead roles. The serial featured Divya Sridhar as the female lead and she earned a good fan base after playing the character of 'Bharathi Puviarasan' in the serial. However, due to reasons unknown she has walked out of the serial and the makers have found an exciting replacement.

Yes! The highly talented and widely popular actress, Srithika Saneesh will play the female lead character of Bharathi. Srithika's new episodes will be aired from tomorrow (June 14 - Monday) and the episodes will play at 12 Noon. Srithika Saneesh took to her official Instagram page to share the good news with her followers and fans. It is going to be exciting to see Srithika replacing Divya Sridhar in Magarasi and let us see how the Tamil audience receive it.

Srithika is best known among the Tamil people for playing the character of Malar / Malarkodi Gopi in Sun TV's blockbuster hit serial, Nadhaswaram which aired between 2010 and 2015. Srithika as Malar, Gopi's wife, left a solid impact and earned a good fan base, especially among the family audience. Later, she also acted in the lead role in Kalyana Parisu 2, which was a success among the audience. After taking a small break, Srithika is now back into the television arena and going forward, she will be playing the lead role in Magarasi serial. 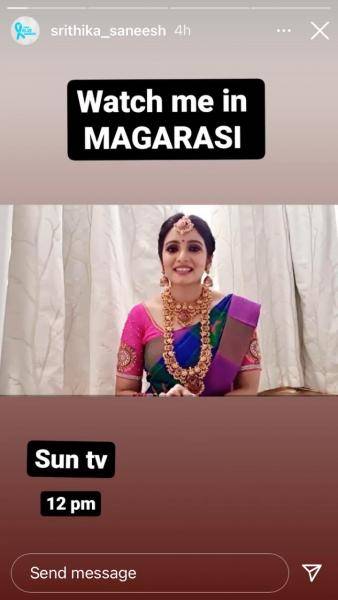 Sivakarthikeyan's special message to fans with his daughter - VIRAL VIDEO!