Very recently, television actress Divya Agarwal became a big topic of discussion on social media after her topless photoshoot pictures went viral among the netizens. Divya Agarwal posted pictures on her official Instagram picture and these pictures were from a concept based photoshoot. She was seen topless in these pictures and it created an outrage among the people. A certain section of netizens abused her for posing half naked and also labeled it to be disgraceful. However, Divya doesn't seem to be disturbed by the abusive comments. The young and talented actress gave a striking reply to all the hate and trolls against her.

Sharing a screenshot of the derogatory and abusive comments that she received for the topless picture, Divya Agarwal wrote, "One concept shoot n boom some people go crazy over it.. you can't tell me what to wear, Indian clothes or no clothes! Sad how the character of a person is defined by their apparel". Similarly, she also shared her thoughts about the online trolls and hate, in an exclusive interaction with Times Of India. She mentioned that she does not give too much attention to the comments and added that she did the photoshoot only because she liked the concept behind the photoshoot series.

Divya was quoted as saying, "I genuinely don’t think much about it. I don’t think much about what to post. The trolls are a big headache, what to tell you. This shoot was for my own personal Instagram. I was trying to experiment. In the year 2020, I was at home it was so disappointing. You must know what I have been through. I thought of doing something which I have never done and was experimenting. It was never an intention to show off my body. I saw this concept and I really liked it and wanted to try it. There is nothing more to it.”.

For the uninformed, Divya Agarwal is widely known for participating in MTV Splitsvilla Season 10 and MTV's Ace of Space: Season 1. She made her acting debut with the web series, Ragini MMS: Returns that starred Sunny Leone in the lead role. For now, check out the trending controversial topless pictures of actress Divya Agarwal here: 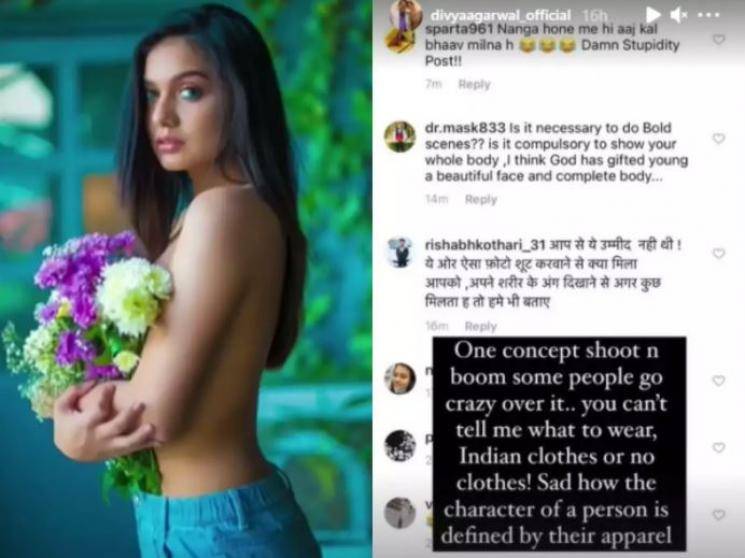