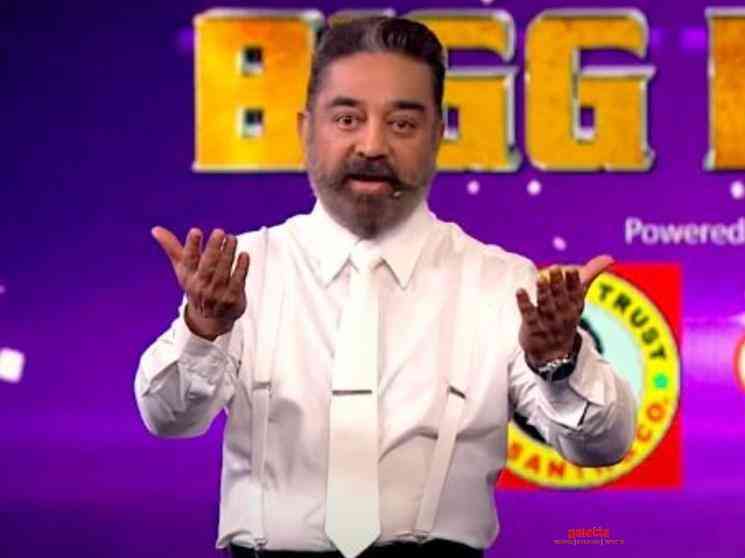 A month has passed already since Bigg Boss Tamil season 4 began, with Vijay TV since witnessing astounding TRP ratings, including Hotstar, which is basking in the glory of yet another year of record viewership. 'Ulaganayagan' Kamal Haasan is serving as host once again after three consecutive seasons, with Rekha Harris and singer Velmurugan so far being the two contestants to be eliminated from the reality TV show. The contestants at present in the Bigg Boss 4 house are Ramya Pandian, Rio Raj, Shivani Narayanan, Samyuktha Karthik, Gabriella, Aajeedh, Balaji Murugadoss, Som Shekhar, Suresh Chakravarthy, Aranthangi Nisha, Anitha Sampath, Sanam Shetty, Jithan Ramesh, Aari, singer Velmurugan and the wildcard entries VJ Archana Chandhoke and singer Suchitra.

In the first promo for Sunday, we see host Kamal Haasan once taking charge on the stage and addressing the contestants, while asking them as to whether there is no relation whatsoever between the ongoing case in the Bigg Boss 4 house and its judge (Suchitra). Suresh Chakravarthy is then seen sarcastically questioning Kamal as to who exactly is the judge in this issue, which evokes a chuckle from the others, while VJ Archana punches him softly on his arm as a sign of sweet camaraderie. Kamal then speaks to Rio Raj and asks him whether Aranthangi Nisha is taking her steps forward based on his words and guidance. Rio acknowledges Kamal's statement and says that Suchitra has been saying so. Suchitra is shown to be in disagreement and informs Kamal that it was him who had told her to "shake things up" in the Bigg Boss 4 house during their briefing to which the latter responds back saying it is not so as she had quoted. Kamal then addresses the viewers and tells them that they are the only true witnesses here in this ongoing issue, which evokes a huge roar of laughter among the contestants.

This latest promo, although starts off tackling a slightly serious subject, soon after transitions into a fun-filled one leaving both the contestants and the viewers happy. Despite no hints exactly on who will be the next contestant to be eliminated from the show this week, we can expect that to likely be revealed in tonight's Bigg Boss Tamil season 4 episode.