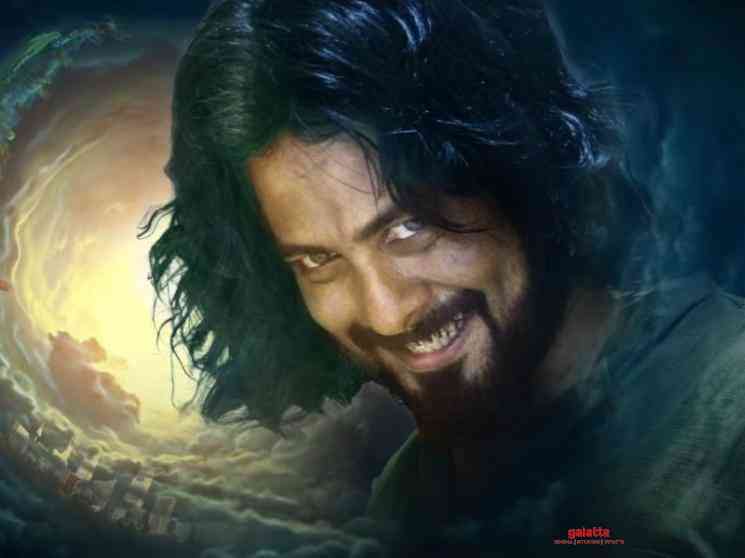 Actor Aari Arjunan has become a household name across Tamil Nadu after entering as one among the sixteen contestants on the smash hit reality TV show Bigg Boss Tamil's fourth season. With Bigg Boss 4 now in its 82nd day, he is already being considered by many fans and a few Tamil film industry celebrities to emerge as the winner, with only a few more weeks remaining for the show to draw to a close. With Aari's views and actions creating a lot of debate among fans of late, the show has been topping the ratings chart for both Vijay TV and the streaming network Hotstar. As the Bigg Boss Tamil season 4 contestant continues to be a major crowd puller now on TV, the makers of Aari's upcoming film Bagavaan have released its first look and a motion poster, which show the actor sporting long hair with a menacing smile on his face.

Directed by debutant Kalingan, Bagavaan is said to be the first illuminati movie in Tamil and is being produced by C. V. Manjunatha under his Ammanya movies, with the first look and motion poster being unveiled for the first time on Thursday's episode of Bigg Boss Tamil season 4. Actress Pujita Ponnada has been cast as the female lead in Bagavaan and is known predominantly for her work in Telugu films namely Rangasthalam, 7, Where Is the Venkatalakshmi, including the recent Keerthy Suresh starrer Miss India. More than 80% of the shoot has been completed on the upcoming film, with the next schedule announced to kick-off from January 2021. Apart from Aari and Pujitha Ponnada, Bagavaan's cast also includes Yog Jaypee, Delhi Ganesh, Aadukalam Naren, Jagan, James Parrot, Lakki Narayanan, Pandi, Alex, Suganya, Krishna, Jegadish and Murugadoss and features music by Prasan Bala, cinematography by Murugan Saravanan and editing by Atul Vijay.

Bagavaan is the next big film for Aari, who also has in the pipeline projects like Ellam Mela Irukuravan Paathupan and Aleka, which has Bigg Boss Tamil season 2 fame Aishwarya Dutta playing the female lead. Prior to his entry on Bigg Boss Tamil 4, Aari had carved a niche for himself in the Tamil film industry having starred in films like Aadum Koothu in 2005, which was his Tamil cinema debut under the legendary Malayalam filmmaker T. V. Chandran's direction. He then starred in Rettaisuzhi in 2010, which featured legendary filmmakers K. Balachander and Bharathiraja in the lead roles. Aari's big break as a leading hero came in 2012 when he starred in Maalai Pozhudhin Mayakathilaey and followed it up with Nedunchaalai in 2014. He also landed a major role alongside Nayanthara in the horror thriller Maya in 2015, while his last release was Nagesh Thiraiyarangam in 2018. Watch Aari's Bagavaan motion below: