Popular actress and Bigg Boss sensation Ramya Pandian has undergone eye laser surgery recently and the news was shared by Ramya's elder sister and costume designer, Sundari Divya. She mentioned that Ramya is completely fine and requested the fans not to be worried. The official note from Sundari read, "Hello insta family, Ramya has undergone lazer treatment for her eyes and she will get back to you all in two days max. We request you all not to worry :). She is doing good. Thank you so much for all the love.". Sundari shared this note on her official Instagram page and it has grabbed the attention of the netizens.

It looks like Ramya Pandian will be on rest for a few days and be back to social media after she returns to normalcy. After taking part in Vijay TV's two blockbuster hit shows, Cook with Comali and Bigg Boss: Tamil Season 4, Ramya Pandian has become a household name and has earned a huge fan base. Up next, she will be seen acting in a new film produced by Suriya's 2D Entertainment. This film will be Ramya Pandian's first outing after her Cook with Comali and Bigg Boss stint and hence the fans are eagerly looking forward to it. Ramya Pandian will be seen sharing screen space with the young and talented Vani Bhojan in this film, which is directed by debutant Arisil Moorthy.

Popular singer, Krish will be making his debut as a music director with this film, while Mynaa fame cinematographer Sukumar has handled the film's visuals.The shooting of the film is completely wrapped up and the team is focussing on the post production works, right now. Ramya Pandian got her first appreciation as an actor with the critically acclaimed Raju Murugan directorial, Joker, which featured Guru Somasundaram in the lead role. The film received highly positive reviews from the critics and the Tamil audience.

Later, Ramya Pandian acted as the female lead in Samuthirakani's Aan Devathai, directed by late filmmaker, Thamira. Her upcoming film under the production of Suriya is expected to give a solid breakthrough in her acting career. Check out Sundari's official statement regarding Ramya Pandian's eye surgery here: 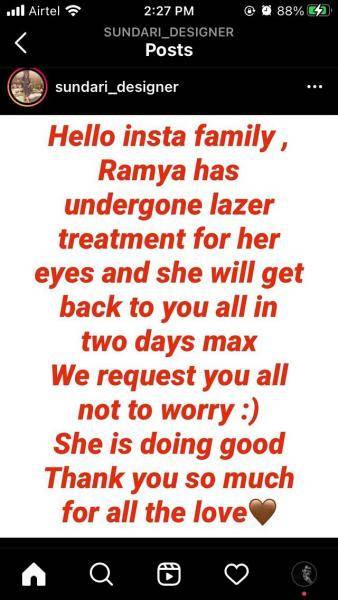 STR's emotional statement over KV Anand's death, reveals plans were made for a new film together

Dhanush's Karnan to be remade in Telugu - Know who is playing the lead?