Anushka and Madhavan's Nishabdham pre-teaser is here! Check it out...

It has been quite some time since we got to see Anushka in a full-length role, on screens. Her last movie was Bhaagamathie, which released in 2018. However, she was seen in a cameo in the recently released Sye Raa Narasimha Reddy, which had Megastar Chiranjeevi in the lead. It is known that Anushka is currently working on the Tamil-Telugu-English trilingual Nishabdham, which also has Madhavan, Anjali and Shalini Pandey, among others as part of the cast. Titled Nishabdham in Tamil and Telugu, this movie's English version has been titled Silence. The unit has now released a pre-teaser of this movie, for the occasion of Deepavali.

This 19-second pre-teaser is very intriguing and shows a musician, who is most likely to be Madhavan, playing his instrument at a funeral. Then, there is a pair of hands, making a signal. There is a shot of a stage and the opening shot is that of a beautiful house, beside a lake. These visuals and the music set up expectations for a perfect spine-chilling thriller. Directed by Hemant Madhukar, this movie is being produced by Kona Venkat and TG Vishwa Prasad, under their People Media Factory and Kona Film Corporation banners.

The movie's shoot is said to have been wrapped up and it is said to currently be in the post-production stage. Anushka's first look from Nishabdham was revealed on September 11th, while Madhavan's first look was released on October 7th. Gopi Sundar is scoring the music for this movie while Shaneil Deo is handling the cinematography. Anushka is said to be playing the role of a speech impaired artist while Madhavan would be playing the role of Anthony, a musician. 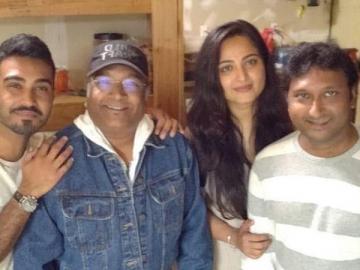 Check out the pre-teaser here: