Thalapathy Vijay's Bigil had hit the screens yesterday (October 25) amidst sky high expectations from the fans and general audience. The film released in record number of screens worldwide and it opened to fairly decent reviews and a favourable reception from the fans. We saw Vijay in dual roles, one as father Rayappan, and another as a son, Michael aka Bigil. Rayappan was an aging don with a rugged look and his character was easily the most loved by the fans and the general audience. Rayappan's character was the anchor of Bigil.

However, since the film had to focus on the sport of football and women empowerment, we did not get to see much of Rayappan and his history. On Twitter, one of the fans requested director Atlee for the prequel of Bigil which will completely focus on just one character, Rayappan. Atlee reacted to that request in a positive manner by replying, "Senjutaaaaaa pochuuuuu nanba". This reply has got the fans excited and for sure, they will be excited to see Vijay again as Rayappan, this time, with full focus on him. 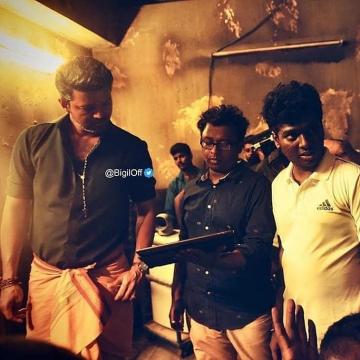 Atlee is expected to do a film each with Jr NTR (in Telugu) and Shah Rukh Khan (in Hindi) and probably when he comes back to Tamil, we can eagerly wait to see if his next will be the prequel of Bigil. Produced by AGS Entertainment on a mammoth budget of Rs 180 crores, Bigil's star cast includes names like Nayanthara, Jackie Shroff, Kathir, Vivekh, Yogi Babu, Daniel Balaji, Indhuja, Varsha Bollamma, Reba Monica John, Amritha Aiyer, Indraja Shankar, and others.

"Bigil will always be remembered for the vandalism displayed...": Bigg Boss 3 star lashes out