Amartya Bhattacharya's 'Adieu Godard', in Odia and English, is a repository of Godardian playfulness: in terms of form as well as content. 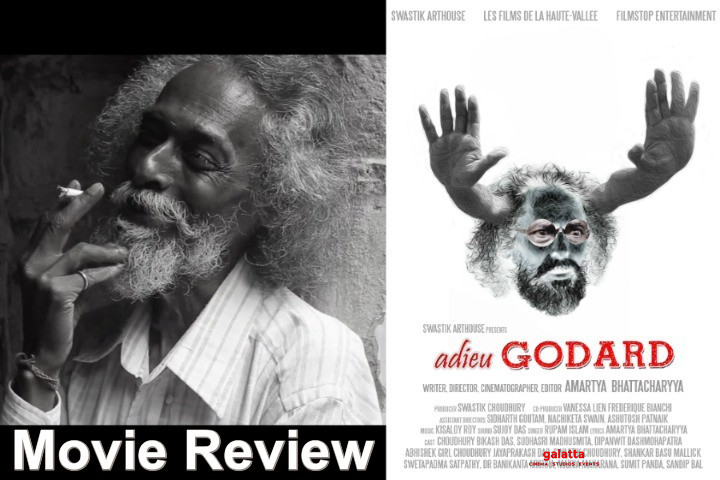 Cast : Choudhury Bikash Das, Sudharsri Madhusmita, Dipanwit Dashmohapatra, Swastik Choudhury,
Production : Swastik Choudhury
Director : Amartya Bhattacharyya
Music Director : Kisaloy Roy
The film's most beautiful thought is that art has the power to move you, even if it's an art you've never been exposed to. Sometimes, if you give it a chance, the connect just happens.

Are the older portions – about her father, about Joe – simply stories being made up for Pablo's screenplay? Why does the visual palette go all the way from black-and-white to full colour to something in-between, sometimes within the same scene? Why does the sound of rumours turn into a sort of background score? Why does the line "No one is perfect" sound like an homage to the ending of Some Like It Hot? Why must a film be "true"? Between these bouts of cinematic (or Godardian) playfulness, Ananda's story takes an unexpected turn. His DVD store is getting rid of its stock, and he ends up with a copy of Godard's Breathless. Ananda has never seen anything like it. His friends are bored out their wits, because they want “scenes”. But Ananda is hooked – and here's the film's most beautiful thought. Art has the power to move you, even if it's an art you've never been exposed to. Sometimes, if you give it a chance, the connect just happens.

Ananda now wants this connect to happen to the others in his village, and so he wants to screen Breathless for everyone. Is this practical? Will the villagers watch an arty film in a language they do not know (and in a film language they are not familiar with)? A discussion ensues with his friends. Our ancestors stopped using their tails and so we have no tails now. Now imagine what might happen if we stop using our brains. An optimistic Ananda declares that this movie will make the villagers use their brains. "Thinking will enrich them. New ideas will be born." For example, why should we always think of films as having heroes and heroines and villains? Why can't they all just be… "characters"? Why should a film fit into a box that says it's a romance or an adventure or a thriller? Can art be owned? Amartya Bhattacharya seems to be asking these questions not just in the context of Godard but also mainstream Indian cinema.

The film is in Odia and English. Some of the lines appear stilted (then again, everyone speaks English differently), and some of the acting is too broad. Ananda's friends, especially, oversell their eagerness. But the framing is utterly gorgeous, and the film keeps finding ways to surprise us. When the villagers see Breathless, for instance, what we see are serene images of nature – the settings surrounding the screening. This is itself a narrative rupture. The characters see one thing. The audience sees something else. And yet, both visuals are connected by geography. Adieu Godard takes its playful premise into very serious zones, where we seem to be watching not just the story (or stories) within this movie, but something bigger, something about the art form that is cinema. Godard said: "Every film is the result of the society that produced it." In this film, we see that even if a society rejects a film, another film can be made about it. If that sounds a little self-reflexive, well, that's Godard.