Onion thefts reported across the north as prices soar 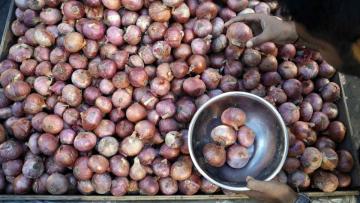 We have been complaining of the price of onions for over a week now, what with the price of the nearly-staple vegetable shooting too close to ₹100 a kilo earlier this month.

The onion prices stood at ₹80 per kilo in the south in the beginning of the third week of November and North India, where onions are invariably part of almost every meal, is feeling the heat. Not only is the price higher and ever-dynamic in the north, there have been incidents of thefts were the burglars leave the occasional valuables inside a godown and make away with consignments of onions. There have been at least two counts of 'onion burglars' striking, from two different states.

According to sources, the earliest account came from Bihar, where burglars painstakingly took away 328 sacks of onions from a warehouse. The consignment - worth ₹8 lakh, was taken away from a warehouse belonging to one Dheeraj Kumar, located at Sonaru Colony in Fatua police station limits, Patna. The burglars also took away ₹1.83 lakh from the cash box, which incidentally, was the proceedings of onion sales on Saturday. The theft was discovered on Sunday and a complaint registered on Monday.

Interestingly, carrying away 328 bags of onions is not a small feat. There would have been at least six to eight people, with a truck or a minivan, to take away the said amount of onions and it would be highly likely that somebody in the area spotted the activity. Inquiries are on.

In the second case, reported from Kalwan taluk in Maharastra, a farmer complained that onions worth ₹1 lakh was stolen from his warehouse. According to the case file by farmer Rahul Bajirao Pagar, the man had a 'summer stock' of 117 crates of onions weighing up to 25 tonnes. He had left the consignment in his godown and returned to find it cleared out. While the estimated cost, in both cases is the price paid for onion bulbs on wholesale: The price that onions fetch on the retail market is higher than the quoted amount.

Another farmer in Maharastra has claimed that his stock was vandalised by unidentified people. Even as the country has begun to covet the vegetable, Union consumer affairs minister Ram Vilas Paswan said there is no scarcity of onions in the country.