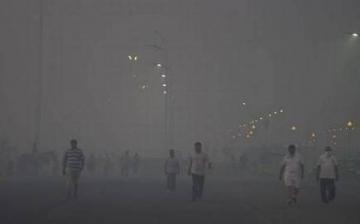 Even as Chennai plows through a week of haze, thanks to the pollution plume brought southward by the change in wind patterns in the Bay of Bengal, comparisons to the cities show grim statistics. According to State statistics, Chennai now is the only city in the South Indian city battling Smog.

While all pollution recording centres at Bengaluru recorded an average rate in the range of 102-150, Hyderabad averaged at 120-170. In Chennai, the levels have been soaring between 216 and 358, with 358 being recorded at Manali.

Twitterati has been voicing concerns and all outlets are issuing warnings against health conditions like allergies and respiratory issues. There has been a marked spike in the haze levels in the city, especially close to the dawn and dusk, and the shifting of the pollution plume above North India has been blamed. The development of Bulbul cyclone system took away the sea breeze that usually keeps the particulate matter in the atmosphere to the minimum.

Though the situation seems bleak, there will be respite in the week ahead as the monsoons will return with full force after the passing of the cyclone. Rains are estimated to begin again in Chennai by November 17. South Tamil Nadu, especially the regions further in from the coast is expected to receive rainfall alongside Odisha and West Bengal, during the crossing of the cyclone.