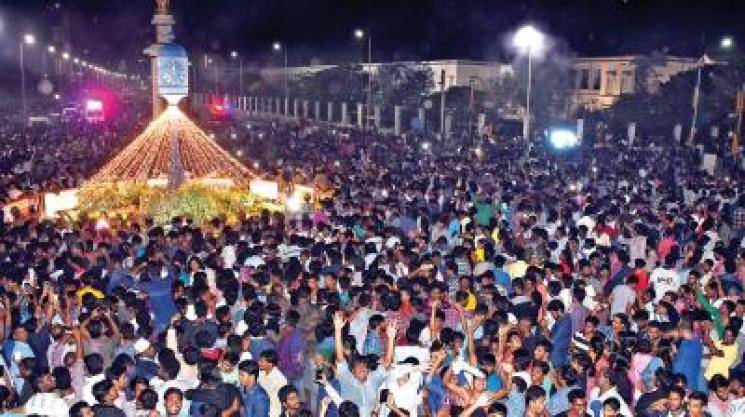 Chennai: City traffic police has made elaborate arrangement to manage the New Year revelers in the city and have issued a strict warning for compliance.

Around 15,000 police personnel will be deployed in and around the city and vehicle checks will be conducted at 368 important junctions in the city from 9 pm on Tuesday. Help centres will be arranged and at least 25 patrol vehicles will be stationed at crowded places. Drones will also monitor crucial junctions and All-Terrain Vehicles have been deployed on the beaches in Marina, Santhome, Besant Nagar and Neelankarai.

The inner roads on Marina Beach will be cordoned off by 8 pm on Tuesday after which the vehicles may exit only via the road behind Light House. The stretch of road from Gandhi Statue to War Memorial will also be likewise cordoned off at 8 pm. Vehicles heading towards War Memorial from RBI subway and Walajah point will be diverted via Flag Staff road towards Anna Salai and the vehicles heading towards Gandhi Statue to get to Anna Salai will be diverted via Katcheri Road, Luz and Royapettah. Vehicles from Karaneeswarar temple will have to take the Santhome high road. Besant Nagar 6th Avenue will also be closed for vehicular traffic from 8 pm. While parking has been arranged on Besant Nagar third and fourth main road and second, third, fourth and fifth avenues. Those going to the Marina Beach may park their vehicles at the Queen Mary's college campus, Swamy Sivananda Salai, Railway parking zone on Lloyds Road in Chepauk, Dr Besant road and Lloyds road.

Special teams have been formed to stop bike racing on the East Coast Road (ECR) at Neelangarai, Thuraipakkam, Thiruvanmiyur, Outer Ring Road, etc and any offenses under the Motor Vehicle Act will be dealt with seriously.

The driver's licenses of those who get caught for driving under the influence will be cancelled and their names added to the serious offenders’ list. This would make police clearance for passport and visa verification.

The Chennai Metro Rail will also operate till 1 a.m. in the night to help its patrons get home after New Year celebrations.