Protests notwithstanding, CAA comes into force 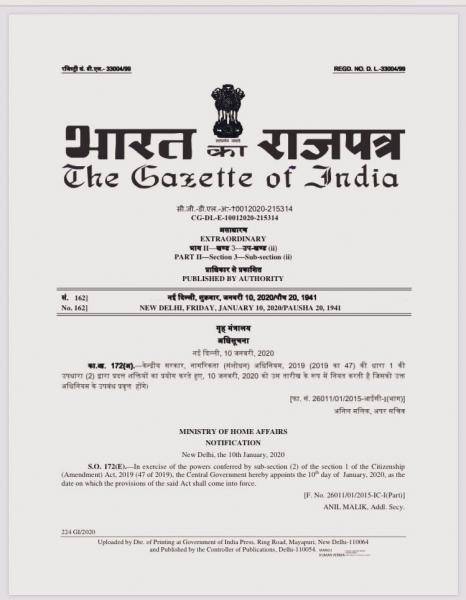 The Citizenship (Amendment) Act, against which a good majority of the nation has been protesting, came into force on Friday almost a month after it was passed by the Parliament during the winter session.

“In exercise of the powers conferred by sub-section (2) of section 1 of the Citizenship (Amendment) Act, 2019 (47 of 2019), the Central Government hereby appoints the 10th day of January 2020, as the date on which the provisions of the said Act shall come into force,” said a gazette notification from the Ministry of Home Affairs announcement.

The CAA grants citizenship to six communities —  Hindu, Sikh, Buddhist, Jain, Parsi, and Christian — who have come to India from Pakistan, Bangladesh and Afghanistan up to December 31, 2014 on account of facing religious persecution, but excludes Muslims from the lot. There has been widespread protests in every state ever since the act was passed and other issues like violence in Jamia Milia University, the attack on JNU protests and the shutdown in Kashmir. Several protesters from all walks of life have courted arrest, opposing the Act. At least 27 people, including three children, are reported to have lost their lives following police action at protests with most protesters killed in BJP-ruled Uttar Pradesh. Most of the reports of violence come from areas which are the strongholds of the BJP or other Hindu factions.

Meanwhile, several protests have been organised against CAA throughout the country on Saturday and Sunday. The Kerala government raised eyebrows on Saturday by publishing an advertisement calling the CAA discriminatory and professing pride in blocking it. The women's protest at Shaheen Bhagh, which has stayed put for over 27 days, is still going strong, while similar women's protests are erupting in West Bengal. Assam, where the level of civilian protests is at its peak, has been so voraciously opposed that Prime Minister Narendra Modi, who is yet to address the protests or the allegedly State-sponsored violence in country's leading educational institutions, has had to cancel plans to visit, twice in the past month. After Tamil Nadu's #gobackModi and Kerala's #PoMoneModi, Bengaluru protested a visit by the prime minister using the same hashtag - GoBackModi - both on Twitter and on the ground, while Kolkatta seems to be trending the hashtag #GoBackModiFromBengal on Saturday to mark the prime minister's two-day visit.