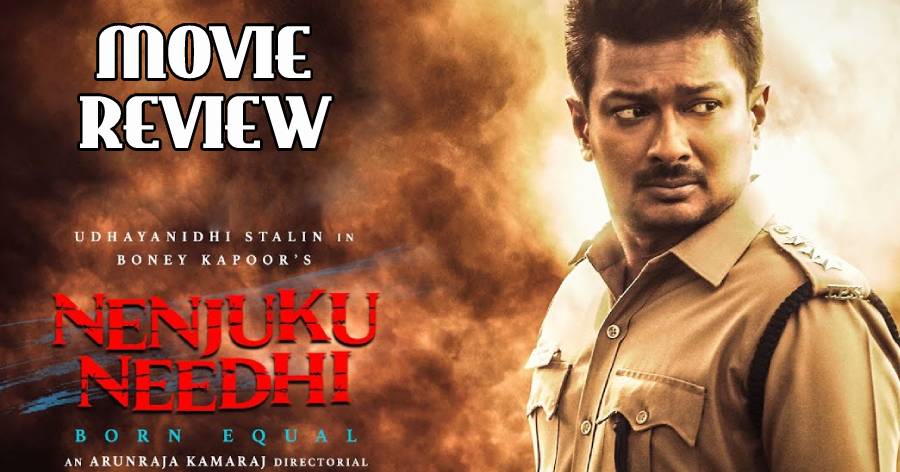 After 2.5 years, Udhayanidhi Stalin the actor is back in action with Nenjuku Needhi which has hit the screens today. The film, directed by Arunraja Kamaraj of Kanaa fame, is the official Tamil remake of the critically acclaimed Hindi film, Article 15. So, is Nenjuku Needhi as impactful as the original version? Read on to know!

STORY:
Three Dalit teenage women are gang-raped by influential men of the society. Two among the three are dead and one goes missing. Vijaya Raghavan IPS (Udhayanidhi Stalin) is at the helm to handle the case and solve the mystery. Vijaya Raghavan faces several hurdles and discovers shocking truths during the mission. Did Vijaya Raghavan manage to find the missing girl and win the mission? Watch the film to know the answer.

SCREENPLAY, DIALOGUES, & DIRECTION:
Arunraja Kamaraj shines effectively as a filmmaker with Nenjuku Needhi and he's definitely shown a great level of command over the craft. In terms of filmmaking, Nenjuku Needhi is several notches higher than Arun's debut and this one is surely an important outing in his career. The changes from the original version have been made in an interesting fashion and that is what makes Nenjuku Needhi more appealing and impactful. Without diluting the core emotion, Arun has constructed the screenplay and there are no major hiccups as such. The film moves on a serious note right from the beginning with occasional humour elements lending support.

Arunraja has conceived the film and presented it in an impactful manner and the audience is sure to go out of the theatres with solid takeaways. The dialogues are top-notch. The dialogues about the system, caste discrimination, quota reservation, and inequality are to the point and it hits you straight. The impressive aspect of Nenjuku Needhi is that every dialogue has a purpose and the purpose is served rightfully.

There are a few minor flaws that the film has, but in the larger picture, those can definitely be neglected. Arunraja should also be lauded for making Interesting contemporary political and social references and they never look out of place. Nenjuku Needhi wins with regard to the writing and execution.

CAST:
Udhayanidhi Stalin, the actor is in full form as Vijaya Raghavan IPS and Nenjuku Needhi brings out the untapped side of him. He has played the character with conviction and a certain level of subtlety which has worked in the favour of the film. It will be a welcoming changeover for the audience to see a different shade of Udhay. Aari delivers the impact with an effective and gripping performance. Suresh Chakravarthy is a revelation. He brings out the evilness inside him with his body language and natural performance. Ilavarasu and Abdool have also pitched in their support with solid performances. Shivani Rajashekar in a short role leaves a mark.

TECHNICAL:
Dhibu Ninan Thomas's music is one of the major strengths of Nenjuku Needhi and his pulsating and intense background score adds more vitality to the film. Dinesh Krishnan's visuals aesthetically aid Arunraja's vision and the shots effectively convey the purpose. Ruben's editing is crisp, ensuring the cohesiveness of the film.

SO?
Udhayanidhi Stalin, Arunraja Kamaraj and their team deliver a top-class film that holds your attention throughout.

Verdict: Nenjuku Needhi is a must watch that leaves a solid impact!

Valimai producer Boney Kapoor postpones the teaser release of his next Tamil film!