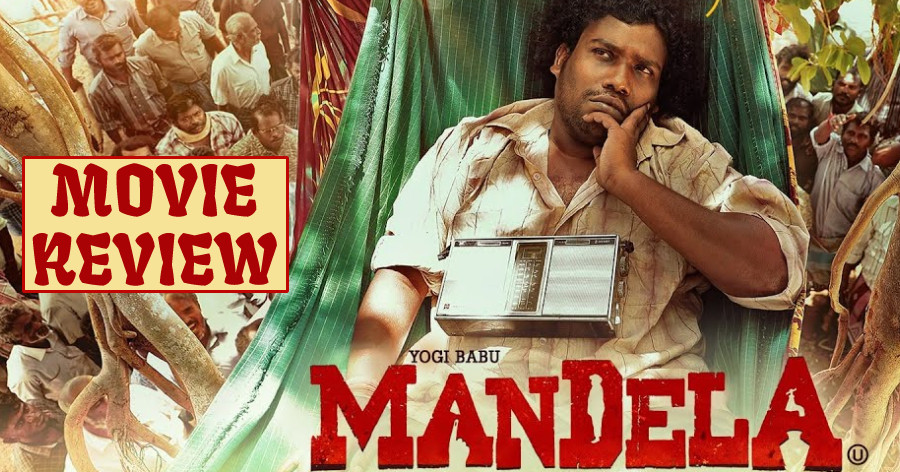 Yogi Babu's Mandela is one of those films which leaves you with a solid impact when you finish watching it. The film, which is directed by debutant Madonne Ashwin, stars Yogi Babu in the titular character, while Sheela Rajkumar, Kanna Ravi, GM Sundar, Sangili Murugan, others play supporting roles. Mandela's teaser and trailer showed good promise and it had a certain flavour of freshness in its packaging. Has the film lived up to the promise? Read on to know!

The film is set in the village of Soorangudi, where a panchayat election is set to take place. Two political parties fight for power and both the parties gather their votes through caste, money, friendship, families, and more. A situation arises where Smile (aka) Mandela's (Yogi Babu) vote becomes the deciding factor. Both the parties gather an equal number of votes and whoever manages to win Mandela's vote will win the election. Mandela, who was all the while ignored and put down by the villagers, because of his caste and job, is being pampered and given all kinds of freebies. If Mandela votes for one party, the members of the other party threaten to kill him and vice versa also applies. At the end, who did Mandela vote for and what was his realization in this election period is what the film is all about.

Debut director Madonne Ashwin has presented an outstanding film that is beautifully written and packaged. The writing is so neat and organic and the sequences have a fantastic flow. Everything happens for a reason in Mandela and Madonne Ashwin has tied the knots neatly. Even a small filler dialogue or an unnoticed action has relevance in the film and the finesse in writing needs to be appreciated. The writing is not only entertaining and humorous but also knowledgeable in many places. The commentary lines about caste indifferences, wealth, election campaigns, freebies, hit you hard and make you realize a lot about the society you live in. Kudos to Madonne Ashwin and his team.

There is a lot of characters in the film, but each one has a distinctive characteristic feature. The best part about Mandela is its liveliness throughout the film. Though the film takes up a very important social topic as its premise, the story-telling pattern is very fascinating and fresh. The humour is organic and it doesn't rely on body shaming or slap-stick and other easy techniques. Mandela keeps you engaged for the most part and you find a mild dip in the engagement factor only for a few minutes after the intermission. The makers couldn't have asked for a better time period to release the film. With the Tamil Nadu State Elections coming up, Mandela feeds you with the right kind of information and tells you what to do and what not to.

Yogi Babu has delivered a top-class performance and one can definitely call it to be his career-best. We have always been used to seeing Yogi Babu in a character that is loud, extroverted, and always talkative. Mandela is a welcome changeover as we see him in a subtle character. As an innocent young man, Yogi Babu steals the show and the Tamil audience is surely going to enjoy this side of him. Kanna Ravi is the next impressive talent in Mandela and he shows great promise. Kanna Ravi has a solid potential to become one of the prominent next-gen actors. GM Sundar also delivers a neat performance. Sheela Rajkumar, as one of the very few people who genuinely care for Mandela, exhibits her talent neatly and fits the bill.  There are a lot of other fresher and lesser-known actors who give ample support to the movie with their natural performances.

Vidhu Ayyanna's cinematography is splendid and he sets a good tonality to the film through his visuals. Philomin Raj's editing is neat and aids Madonne Ashwin's vision neatly. Bharath Sankar's songs are fresh and have an indie feel to them, but a few songs don't leave an impact. However, the background score is a solid support to the film.

Debut director Madonne Ashwin has made a fantastic debut in Tamil cinema with Mandela and he is surely here to stay. Mandela can definitely be called one of the best films of this year and it need not be missed.

(Mandela will stream on the NETFLIX platform on April 5).

Verdict: Mandela is a largely entertaining socio-political drama that has a splendid writing!

Maari director's new political film announced - check out who the hero is!