Leading Telugu actor Vijay Deverakonda has shared a message after the promotions for his pan-Indian film, Liger, took an unexpected turn. During a promotional event at the Nexus Seawoods mall in Navi Mumbai, the 33-year-old actor along with the upcoming sports action film's heroine Ananya Panday, had to leave midway due to an uncontrollable crowd. Photos and videos of the Liger promotional event on social media also show a fan fainting following which the organizers decided to call off the event. A few hours after the incident, Vijay Deverakonda took to Instagram Stories and addressed his fans hoping they were "safe and back home".

Vijay Deverakonda wrote, "Your love has touched me. Hope you all are safe and back home. Wish I could have been there with you all so much longer. Thinking about you all as I go to bed. Goodnight Mumbai. #Liger". Reputed film production-distribution banner Dharma Productions, one of the banners associated with Liger, too released a statement informing fans that the team had to leave the event due to safety concerns. "Team #Liger is overwhelmed with all the love that you showered on us today at our mall visit in Navi Mumbai. We would like to thank everybody who came to support us," the production house said in its statement. Dharma Productions further added, "Unfortunately, we had to leave midway for the safety of everyone, but the massive turnout just reinstates the love you have showered on us and we would like to send the same love manifold to all our amazing fans! Hope everyone is safe." 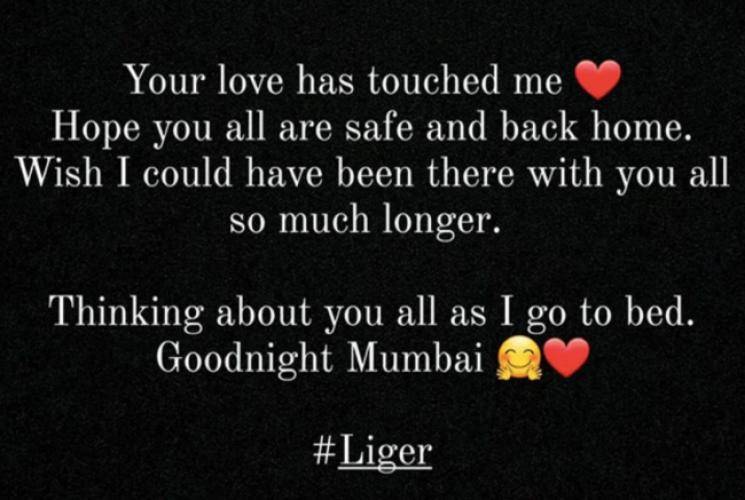 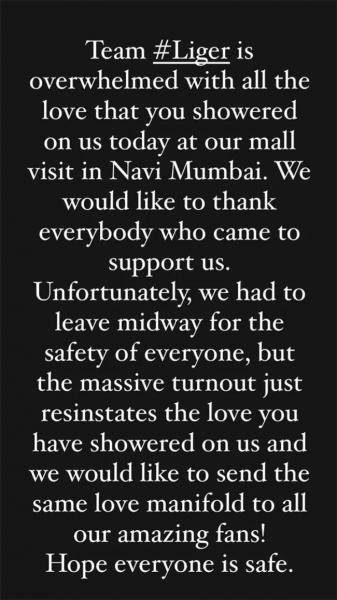 Liger will see Vijay Deverakonda as a fighter from Mumbai competing in the MMA championship as an underdog and has been directed by Puri Jagannadh, who has also produced the film with Charmme Kaur under their Puri Connects banner in association with Karan Johar and Apoorva Mehta's Dharma Productions. Scheduled to open in cinemas worldwide on August 25 in Hindi, Telugu, Tamil, Kannada, and Malayalam languages, the buzz for the film has been tremendous so far as the trailer released recently received a fantastic response from fans everywhere.

Predator prequel gets a new glimpse - check it out!

Here is the big announcement on Jayam Ravi's next film after Ponniyin Selvan - check out!

Predator prequel gets a new glimpse - check it out!

Here is the big announcement on Jayam Ravi's next film after Ponniyin Selvan - check out!