Sivakarthikeyan's Doctor is all set for a grand theatrical release on October 9, Saturday, and the movie has got high expectations among the fans and film buffs. Doctor is expected to take a very good opening at the box office, attracting the youth and family audiences in large numbers. With just three days there for the film's release, the censor details are now out on social media. Doctor has been censored with a U/A certificate and the U/A certification is obviously because of the action quotient in the film. The final runtime of Doctor is locked at 148 minutes (2 hours 28 minutes). The image of the censor certificate has been doing rounds on social media since this morning.

It is going to be quite exciting to see how the Tamil audience receive the film and let us hope that the film turns out to be a success at the box office. Doctor will have Sivakarthikeyan playing a very subtle and introverted character, something very unusual from his other films. Priyanka Arul Mohan plays the female lead, while Vinay will be seen as the key antagonist. Bigg Boss fame VJ Archana, Yogi Babu, Cook with Comali fame Dheepa, Arun Alexander, Redin Kingsley, Sunil Reddy, and Zaara Vineet, play supporting roles.

Nelson Dilipkumar who is currently working with Thalapathy Vijay in Beast, has directed Doctor and this film will give a brief teaser of the director's work in Beast. Doctor is produced by KJR Studios, in association with Sivakarthikeyan Studios, and has music composed by rockstar Anirudh Ravichander. After delivering a chartbuster album, all eyes are now focussed on Anirudh's background score for the film. Vijay Kartik Kannan and R Nirmal have handled the cinematography and editing respectively. drk Kiran has taken care of the art direction. For now, check out the latest censor details of Sivakarthikeyan's Doctor here: 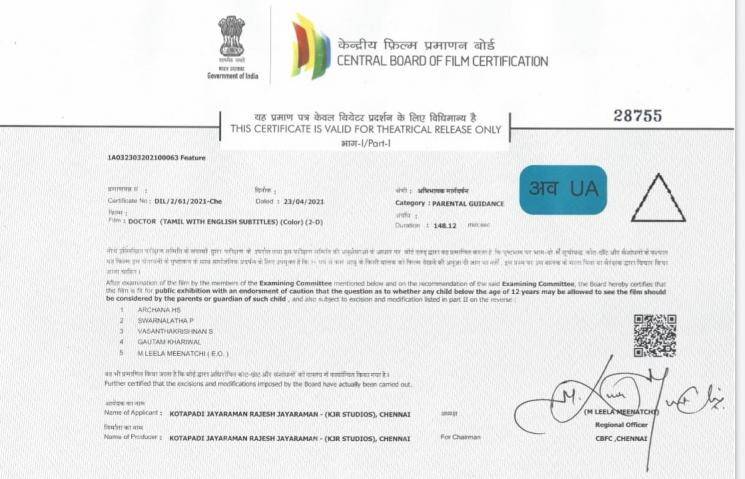