Superstar Rajinikanth's Annaatthe is currently in the post-production stage and the film is scheduled for a mega grand release on November 4 for the festive occasion of Diwali. The film is sure to take the box office by storm and it is going to be a celebration of sorts at the theatres. The first look and motion poster which were released recently opened to a phenomenal response from the fans. The first single from the movie is expected to be launched very soon. Meanwhile, a super exciting update on Annaatthe is out and here is what you need to know. Popular production/distribution firm, Red Giant Movies will be associating with the film for its grand release worldwide.

Udhayanidhi Stalin, the founder of Red Giant Movies, hinted at the same by sharing the poster of Annaatthe on his official Instagram page through a story. Annaatthe is produced by Sun Pictures, a banner that has a strong foothold in the trade market, and when Sun Pictures collaborates with Red Giant Movies, one can be sure of the film's mammoth release. A formal announcement on the same is awaited. Before Annaatthe, Red Giant Movies will be involved with the distribution of Sundar C's Aranmanai 3 (starring Arya and Raashi Khanna), which is scheduled to hit the screens on October 14.

Talking about Annaatthe, the film is directed by Siva of Viswasam fame and has music composed by the National Award winning D Imman. The film has a striking casting equation that includes prominent names like Khushbu Sundar, Meena, Keerthy Suresh, Nayanthara, Prakash Raj, Jagapathi Babu, Soori, Sathish, Abhimanyu Singh, and others. Among the lot, Keerthy Suresh will be seen playing the role of Rajinikanth's younger sister and her character is said to play a significant role in the film's story.

Annaatthe has cinematography by Vetri and editing by Ruben. For now, check out Udhayanidhi Stalin's latest Instagram post on his company's association with Sun Pictures for the release of Annaatthe here: 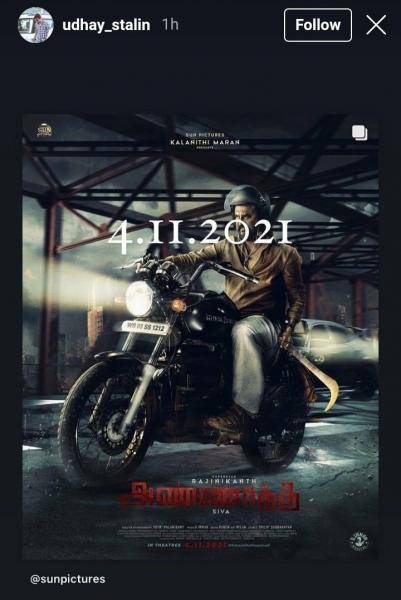