Earlier in the day, it was officially announced by Sathya Jyothi Films that their upcoming film, Viswasam, starring ’Thala’ Ajith and coming out as a Pongal 2019 release had been certified ‘U’ by the censor board. Directed by Siva with hit songs by D. Imman, the action family rural entertainer includes a massive star cast featuring names like Nayanthara as the female lead, Vivek, Kovai Sarala, Yogi Babu, Robo Shankar, Thambi Ramaiah, Bose Venkat, Ramesh Thilak and Jagapati Babu, whose role is yet to be revealed.

Meanwhile, producer T.G. Thyagarajan of Sathya Jyothi Films released an official statement regarding Viswasam saying, “Sathya Jyothi Films has always been linked closely for the family entertainers. Over the years, it has carried this as ritual means of churning out movies that cater the family audiences. We are now happy that CBFC has accredited our upcoming film ‘Viswasam’ with ‘U’.”

He further added, “Our production house is thankful to Ajith Kumar sir and director Siva for being the supportive pillars in making this film happen. We are sure that Viswasam will stand out to be a wholesome entertainer for this season. Music director D. Imman’s songs have turned to be the curtain-raiser for enhancing the festive moods. Apparently, the songs have already become the cherry picks of both urban and rural zone.” 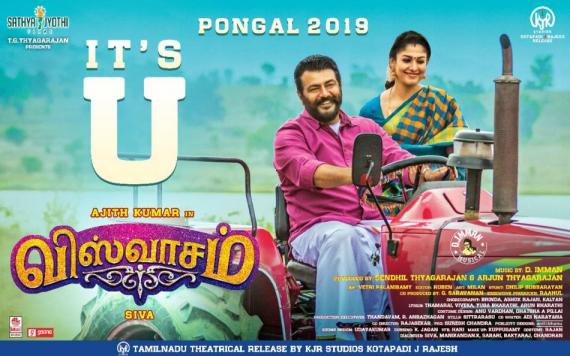