Popular Malayalam actor Neeraj Madhav and his wife Deepthi Janardhan are now proud parents to a baby girl. Known for starring in the Amazon Prime Video web series, The Family Man, Neeraj has now in real life become a complete family man as he and his wife Deepthi welcomed their first child, with the news being revealed by the actor on his Instagram page on Monday. Neeraj posted a photo of himself and his wife holding a pink balloon, which has the text, "It's a GIRL", written on it. He captioned the picture as "We’re blessed with a baby girl !!" The picture's focus is predominantly on the balloon, with the happy parents blurred in the background. Check out Neeraj's post below:

Soon after Neeraj Madhav and Deepthi Janardhan's big announcement, wishes began pouring in as a number of leading celebrities congratulated them for the arrival of their new little bundle of joy into their lives, with fans too showering their compliments to the couple. Leading Malayalam hero Tovino Thomas, known among Tamil cinema fans for starring as the villain in Dhanush's Maari 2, congratulated Neeraj and Deepthi saying, "Congratulations Neeraj and Deepthi !!!", while his The Family Man co-star Priya Mani Raj commented, "Congrats". Another The Family Man co-star Shreya Dhanwanthary was ecstatic about the news and commented, "Oh my gaaad!!! Congratulations!!!! Omg! OMG!!". Likewise, a number of other notable celebrities among whom include Reba John, Nikolay Timoshchuck Jr, Zayn Khan, Siddharth Menon, Pearle Maaney, Aju Varghese, Sharib Hashmi too wished the actor. Below are some of the comments on Neeraj's post: 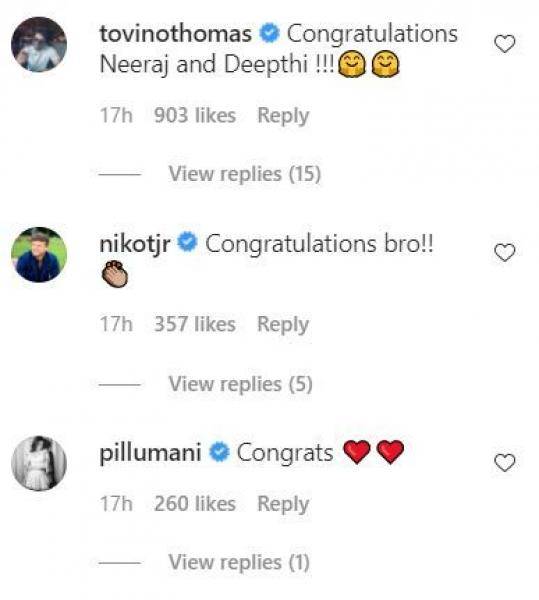 Both Neeraj and Deepthi entered wedlock and got married in 2018. One of the most talented actors in the Malayalam film industry at present, Neeraj has starred in important character roles in a number of big and notable Malayalam films that include Drishyam, Memories, Oru Vadakkan Selfie, Jamna Pyari, Kunjiramayanam, Charlie, Adi Kapyare Kootamani, Paippin Chuvattile Pranayam after his debut in Buddy in 2013. Neeraj often shares pictures of himself with Deepthi on his social media, with the couple celebrating their second anniversary on April 2, 2020. The actor's popularity shot up, especially after starring as the prime antagonist, Moosa Rehman, in The Family Man, with the show's second season set to premiere soon.