In tragic news, Kannada television actress Chethana Raj, known best for her appearances on shows like Geetha and Doresani, has reportedly died after she recently underwent plastic surgery at a private hospital in Bengaluru. She was 21. According to reports, the popular actress underwent a 'fat-free' surgery' on the morning of May 16 and started experiencing changes in her health condition later in the evening after water began to get stored up in her lungs. That said, it is also being stated that Chethana did not inform her parents about the surgery and went to Dr Shetty Cosmetic Hospital for the surgery with her friends. Considering there was no ICU at the hospital, the actress was shifted to the Kaade Hospital in Manjunath Nagar where the doctors claimed that she was brought in dead.

After Chethana Raj's demise, Dr. Sandeep V, ICU Intensivist at Kaade Hospital filed a report at the Basaveshwarnagar Police Station, Bangalore stating one doctor named Melvin, an anesthetist, had entered forcefully at around 5:30 pm on May 16 with a patient ignoring the hospital's protocols and threatened their security. The report read as follows:

"At around 5:30pm today, one doctor named Melvin who is an anaesthetist barged into our hospital with a patient (who was found unresponsive later) disregarding all the protocols of the hospital and threatening our security badly. Before our doctors could intervene and check the patient, he pushed the patient into our ICU and demanded that our doctors treat the patient on the lines indicated by him as the patient had suffered a Cardiac Arrest during some procedure at their hospital M/s Dr Shetty's Cosmetic Centre, situated in Rajajinagar, Near Navrang Theater, Bangalore. No patient file or or doctors recommendatory notes or any other document depicting her condition was produced to us. On checking the patient she was found to have 'No Pulse' and on the insistence of Dr Melvin and team, CPR was initiated and after trying for approximately 45 minutes the patient could not be revived as it appeared that she was Brought Dead. Our doctors were forced to toe the line of Dr Melvin & team with threats and though they were aware that the patient was Brought dead they were coerced into declaring only at 06:45pm, for the reasons best known to them. We strongly object to this kind of behaviour by these doctors and if necessary we may decide to file a report against them. This report is being sent to to you to bring to your notice this incident which does not appear normal." 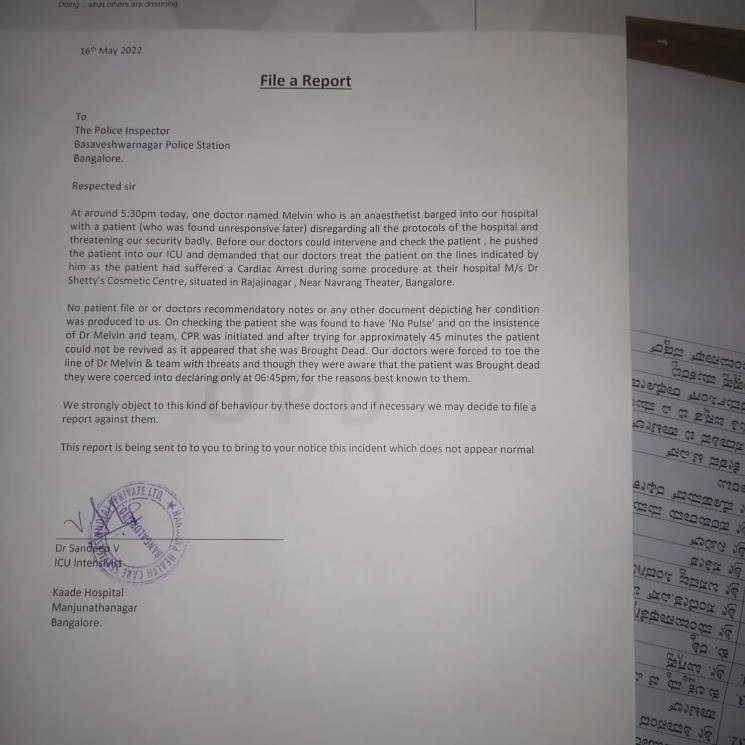