Bollywood actress Kangana Ranaut is once again in the news after her car was stopped by protesters at Kiratpur Sahib in Punjab on Friday. According to reports, the protestors had surrounded the National Award-winning actress' car and demanded that she apologize for her comments against farmers, who had been campaigning for several months against the government's controversial farm laws that were repealed a few days back. An outspoken supporter of the governing BJP, Ranaut had on a number of occasions called a certain section of the farmers as terrorists, Khalistanis and "anti-social elements".

Taking to her Instagram Story, Kangana Ranaut posted videos of the incident and said, "I left Himachal and arrived in Punjab after my flight got cancelled. As of now, a big mob of protesters, who are claiming themselves to be farmers, have surrounded my car and are abusing and threatening to kill me." She added, "This is in a way mob lynching and makes me wonder what would have happened if there was no security around me. There are so many cops and yet my car is not being allowed to leave the place. There are many people who are playing politics in my name. Had the police not been present here, there would have been open lynching." A truce was finally reached after Kangana spoke to a few women protesters and she managed to leave the area. The actress later informed followers on social media that she didn’t apologize to anyone. She wrote, "I am completely safe and have left from there. Thanks to Punjab police and CRPF." Below is the video from Kangana’s Insta Stories:

Actress #KanganaRanaut 's car gets blocked by protestors in Punjab for her comments against farmers. WATCH! pic.twitter.com/5yb0vZd4Fh

Soon after Kangana left the place, there were a few reports stating that she had issued an apology to the protestors, which she went on to deny in another Instagram Story. She wrote, "No one asked me for an apology and I never apologised.... Why should I apologise, for what? For genuine love and concern for the people of Punjab? No I will never do that... entire conversation with the women is in my story and even on all media platforms.... Don't spread rumours please .... I always supported farmers and that's why I spoke in favour of farmers bill and I will continue to do so .... Jai Hind". Below is Kangana's Insta Story: 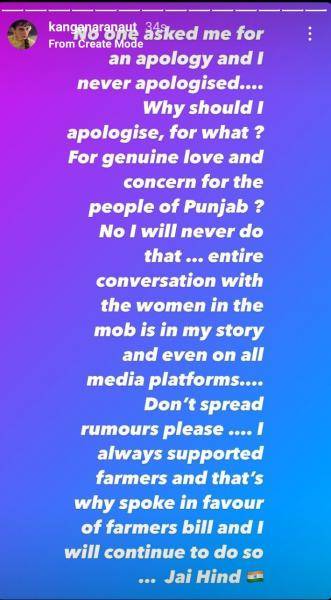