Veteran actress Farrukh Jaffar, best known for her performance in the Ayushmann Khurrana-starrer Gulabo Sitabo and Salman Khan's Sultan, passed away on Friday at a hospital in Lucknow. She was 89. The actress was admitted to Sahara Hospital earlier this month after her health deteriorated, her elder daughter Mehru Jaffar told PTI. "She was admitted to the hospital on October 4 due to breathlessness. She was not well. Her lungs were unable to take the oxygen that had been given to her. She passed away in the evening at around 6 pm," she said. The sad news was also shared on Twitter by Jaffar's grandson Shaaz Ahmad who wrote, "My grandmother and wife of Freedom fighter, Ex MLC Mr S.M.Jaffar and Veteran Actress Mrs Farrukh Jaffar passed away today at 7 pm in Lucknow."

Farrukh Jaffar began her career as a radio announcer on Vividh Bharti Lucknow in 1963 and made a transition to the big screen in the 1981 classic Umrao Jaan appearing in the role of Rekha's mother. She subsequently made appearances on a few TV shows, but landed a role in the 2004 Shah Rukh Khan-starrer, Swades, directed by Ashutosh Gowariker. Some other notable performances by Jaffar include Aamir Khan's Peepli Live in which she played an ill-tempered mother-in-law, while also landing the role of Salman Khan’s grandmother in Sultan. However, her most memorable performance in recent times was playing Fatima Begum, the wife of Amitabh Bachchan's character in Gulabo Sitabo, directed by Shoojit Sircar. 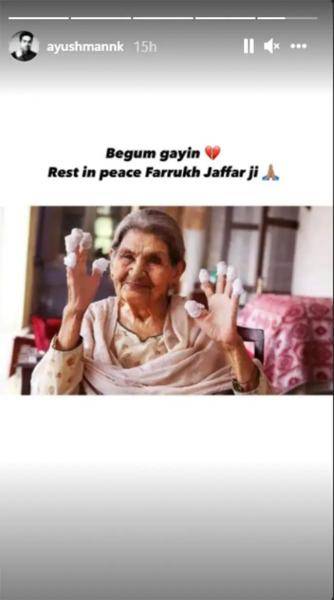