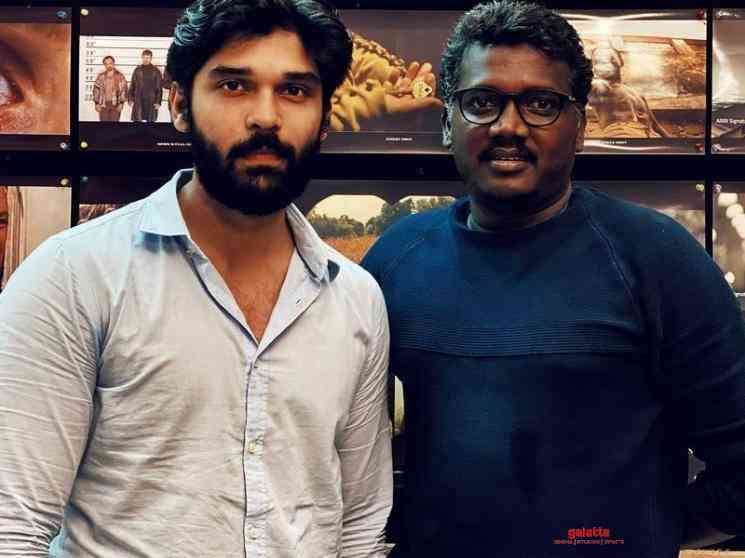 Dhruv Vikram will be teaming up with the highly talented and critically acclaimed filmmaker, Mari Selvaraj for his next outing and the official announcement regarding the project was made last night (December 31). Dhruv posted a picture with Mari Selvaraj on his official Instagram page and captioned, “So grateful and happy to be working on my next with the Ace filmmaker Mari Selvaraj sir 🙏🏻 Truly blessed. @mariselvaraj84,”. The news has created a huge buzz on social media and it looks like an exciting project is on cards. The fans got to witness the strong performer inside Dhruv Vikram in his debut flick, Adithya Varma, and it is refreshing to see him team up with promising filmmakers like Karthik Subbaraj (Chiyaan 60) and Mari Selvaraj.

Dhruv’s film with Mari Selvaraj is yet to be titled. According to reports, this will be a sports based drama film and it is expected to be produced by Pa Ranjith’s Neelam Productions. More details regarding the project are awaited. Mari Selvaraj is currently busy with the post production works of his second film, Karnan that features Dhanush in the lead role. Produced by Kalaipuli S Thanu, this film has Rajisha Vijayan playing the female lead and Lal, Natty, Yogi Babu, Gouri Kishan, Lakshmi Priyaa Chandramouli in supporting roles. The film has music scored by Santhosh Narayanan and cinematography by Theni Easwar. Karnan has got huge expectations among the fans and it is believed to be an important film in Tamil cinema.

After the release of Karnan, Mari Selvaraj will begin work on his film with Dhruv. The refreshing combination has already made the fans look forward to the movie and let us hope that it turns out to be a memorable outing for the young star. Dhruv will also be acting as one of the leads in his father, Chiyaan Vikram’s next directed by Karthik Subbaraj. Tentatively titled as Chiyaan 60, this action gangster film will be produced by Lalit Kumar’s 7 Screen Studios. The film will have music scored by Anirudh Ravichander and cinematography by Shreyaas Krishna. Chiyaan 60 is touted to go on floors early next year.

With back to back solid projects in hand, it looks like Dhruv Vikram is progressing in a healthy and promising track towards success. Wishes have been pouring in for Dhruv Vikram for his new project and we at Galatta Media also send our best wishes to the talented budding actor! Check out the official announcement below: