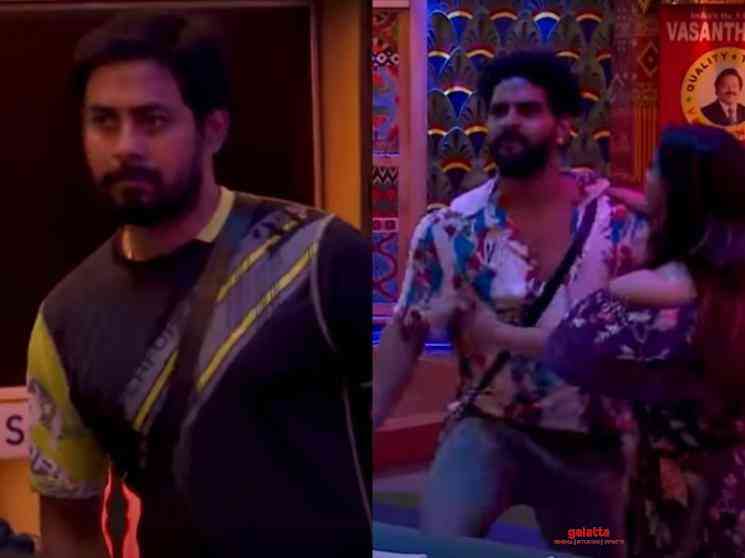 Bigg Boss Tamil season 4 has now entered day 90, with the hit reality TV show's latest edition turning out to be a phenomenal success once again for Vijay TV and the streaming OTT platform Hotstar. So far, 10 contestant evictions have taken place on Bigg Boss 4 among whom include Rekha Harris, Sanam Shetty, Suresh Chakravarthy, Jithan Ramesh, Velmurugan, Samyuktha Karthik, Anitha Sampath, Aranthangi Nisha and the wildcard entrants Archana and Suchithra. With plenty of drama already witnessed, the battle among the remaining contestants has transcended to new heights in the past few days as Ramya Pandian, Som Shekhar, Rio Raj, Shivani Narayanan, Aari, Balaji Murugadoss, Gabriella Charlton and Aajeedh are looking to emerge on top in light of the show nearing its finish soon.

In the first Bigg Boss Tamil 4 promo for Saturday, we see Balaji Murugadoss confront Aari head on and questions him as to what he meant by love making him blind, which he had stated sometime back. We then see Balaji ask Aari whether he saw at any point if he is indeed in love. Aari then responds saying Balaji should have said those exact words to Shivani's mother when she had appeared on Bigg Boss 4 earlier this week. Balaji eventually loses his cool and tells Aari that he would be giving her the apt respect had it been outside of the show. Aari then queries Balaji if he was threatening him, with the rest of the housemates intervening and trying to cool them both.

Ramya Pandian steps in and takes charge to bring down the tensions, with Aari informing her to take her "friend" away. Aari's words evoke dissatisfaction with Ramya, who with folded hands and in a sarcastic manner replies back saying, "Thank you, my dear friend". Som quietly tells Aari to let go of the issue, who then says that he was minding his own business and was himself headed to bed before all tensions flared up. Aari then questions who brought up the topic of Shivani, which infuriates Balaji, who shouts back telling him to leave her out of the discussion altogether. A furious Balaji is seen shouting at the top of his voice and throwing a pillow in a fit of rage, with Shivani trying to cool him down as the rest of the Bigg Boss Tamil season 4 contestants look on helplessly.