In shocking news, leading Telugu hero Sai Dharam Tej sustained injuries after getting involved in a serious bike accident in Hyderabad on Friday night. The nephew of 'Megastar' Chiranjeevi, Sai Dharam Tej, is currently hospitalised at the Apollo Hospital in Jubilee Hills, with doctors issuing an official bulletin on his health condition. According to the hospital's statement, "Mr. Sai Dharam Tej was brought to Apollo Hospitals, Jubilee Hills, following a road traffic accident. He was intubated and was put on assisted respiration in the nearest hospital and later shifted here. As of now, he is medically stable. There are no major injuries in the Brain, Spine and major organs based on the preliminary investigation. He sustained soft tissue injuries and a collar bone fracture. There is no need for immediate surgical intervention."

On Saturday, Apollo Hospitals issued an update on Sai Dharam Tej's health condition and said, "Mr Sai Dharam Tej is stable and all major organs are functioning well. He will continue to be on assisted respiration in ICU for controlled close monitoring and additional investigations will be performed during the day. The next medical update will be shared tomorrow (September 12)." Addressing the incident, Chiranjeevi after meeting his nephew informed fans to not worry as the actor is making a recovery and has not sustained any major injuries. The actor was wearing a helmet when he was riding the bike and has helped in not sustaining any injury to his head. Reports say the actor was traveling on his sports bike when the vehicle skidded off and fell near the Cable Bridge in the Madhapur area. Below is the press statement from Apollo Hospitals on Sai Dharam Tej's health condition: 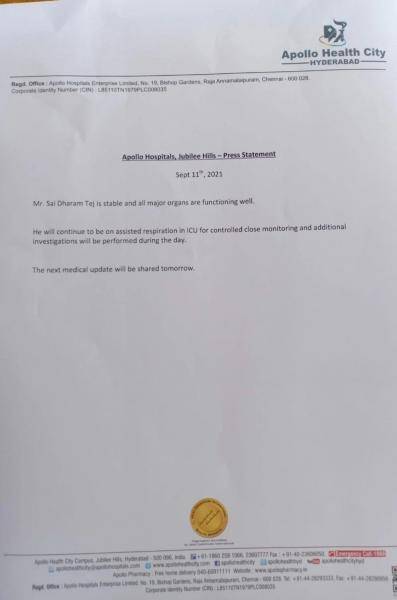