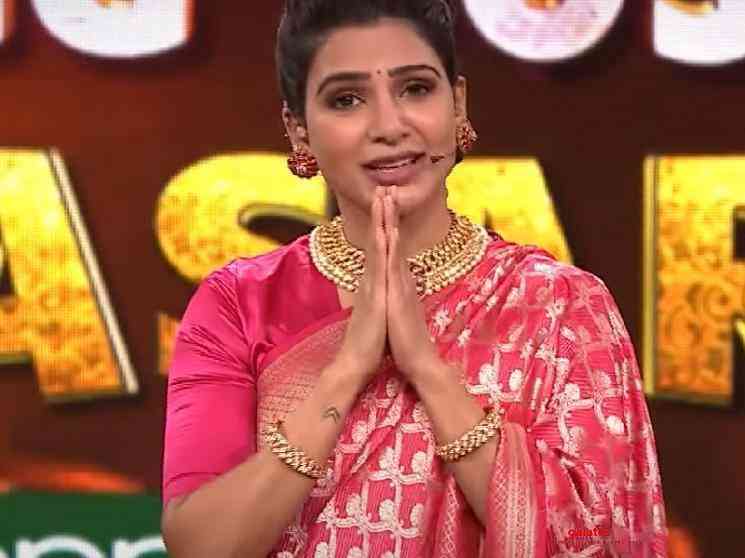 As we all know, Nagarjuna Akkineni is the host of Bigg Boss Telugu : Season 4 and his anchoring skills have a special fan base among the family audience. However, he would not be appearing in tonight’s episode of Bigg Boss as he is currently said to be occupied with the shooting of his next film, Wild Dogs. Nagarjuna is shooting for Wild Dogs in the Himalayas and it was not practically possible for him to return to Hyderabad. Replacing him would be none other than his daughter in law and actress Samantha Akkineni who is the guest host for this weekend. The makers of Bigg Boss have released promos that feature Samantha as the host and her entry looks grand with some exciting celebrations.

We also see the housemates getting pleasantly surprised witnessing the Oh Baby actress as the host. Going by the promo, it looks like an exciting episode is on cards. It is indeed refreshing to see Samantha on the small screen and the promos have already been getting positive reviews. Tomorrow’s episode will be a Dussehra special that will be aired on Star Maa channel at 6 PM in the evening. It is not yet known if Samantha would be seen as the host for the coming weeks, as well. Let us keep our fingers crossed and wait for the official update. It can be recalled that actress Ramya Krishnan participated as the guest host of last season when Nagarjuna missed out on a few episodes.

On the work front, Samantha has various exciting projects in her lineup. She would be joining hands with director Ashwin Saravanan of Maya and Game Over fame for an untitled thriller that will feature Prasanna as the male lead. Samantha is said to play a very challenging role in this new film. She also plays one of the leads in Vignesh Shivan’s directorial, Kaathuvaakula Rendu Kaadhal that has Makkal Selvan Vijay Sethupathi and Nayanthara as the other leads. For now, check out the latest exciting promo of Bigg Boss 4 Telugu featuring Samantha as the host: