Nani's V release postponed to April due to coronavirus

Telugu actor Nani is popular among Tamil cinema audiences for starring in Baahubali director SS Rajamouli's blockbuster fantasy action revnege film, Naan Ee, while also acting in films such as Veppam and Aaha Kalyanam in Tamil. One of the most sought-after actors in Telugu cinema, Nani will next be seen in the upcoming film, V. The actor recently had the action thriller cop drama, HIT, released which incidentally saw him as a producer under his Wall Poster Cinema banner while also being announced sometime to be starring as the lead in a project titled, Tuck Jagadish. 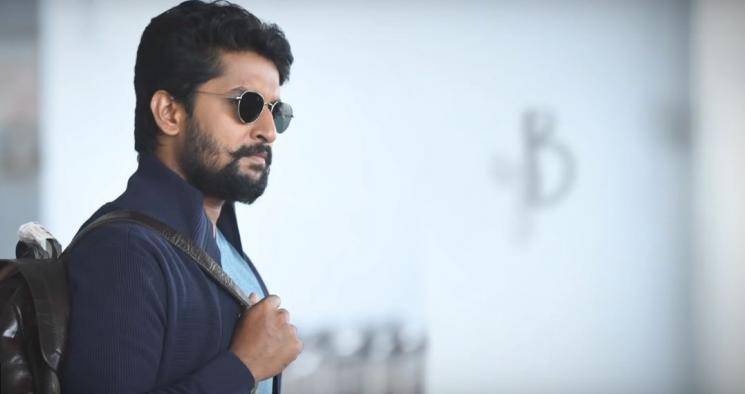 As for Nani's V, the film has created massive excitement among fans who were treated to an action-packed trailer a few days back with the film marking the actor's debut as a villain. V is incidentally Nani's 25th film in his career and has been written and directed by Mohan Krishna Indraganti under producer Dil Raju's Sri Venkateswara Creations banner. Apart from Nani, the film stars Sudheer Babu and Nivetha Thomas as the lead pair with the technical team featuring P. G. Vinda handling cinematography while Marthand K. Venkatesh is taking care of the editing.

Initially announced to come out in theatres on March 25, the makers of V have now decided to postpone the film's theatrical release to April due to the coronavirus outbreak that has taken several lives across the world. Sri Venkateswara Creations has issued an official statement regarding the postponement saying, "V - The Movie has been a very exciting Journey for all of us. From the conception to the execution, we have had a great time and were really looking forward to bringing this labour of love to you. However, the recent outbreak of the Coronavirus (COVID - 19) has made us think about our responsibility to keep the health and safety of the public in mind. We have decided to postpone the film at the moment with an intention of releasing the film in the month of April 2020. Until then let the excitement continue and we promise you It will be worth the wait. Keep yourself safe meanwhile. - Team V,". Check out the statement below: 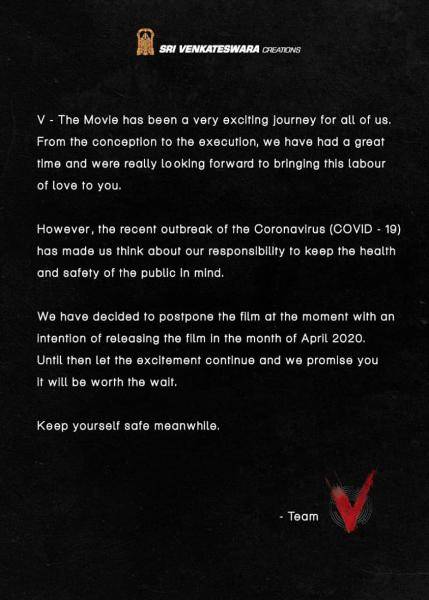