Malayalam actress Bhama breaks the silence on whether she has quit acting - Check out!

A mighty popular name in Malayalam cinema, actress Bhama has starred in over 40 films to date after she debuted in 2007 and has since gone on to work with several top names in the industry. She wed Arun, a Dubai-based entrepreneur, in 2020, and the couple were recently blessed with a daughter in March. As Bhama and Arun continue to enjoy the phase of being parents, a number of fans have been wondering whether the actress has bid goodbye to acting and cinema. Bhama, who recently interacted with fans in a Q&A session on Instagram, was queried by one fan whether she has decided to stop acting to which the actress responded saying, "Thalkalam" (which means temporarily in Malayalam).

Bhama's response has come as a relief for some of her fans, who have been wanting to witness her once again, as the actress had earlier shared an emotional post about her daughter with pictures of the clay impressions of her little hands and feet. During the Q&A, fans also inquired more details about her daughter and asked her to share her first pictures. Some had also requested her to post photos from her baby shower event earlier this year. However, it looks like Bhama is at present more focused on keeping her personal life private and will possibly share more details as time goes by. 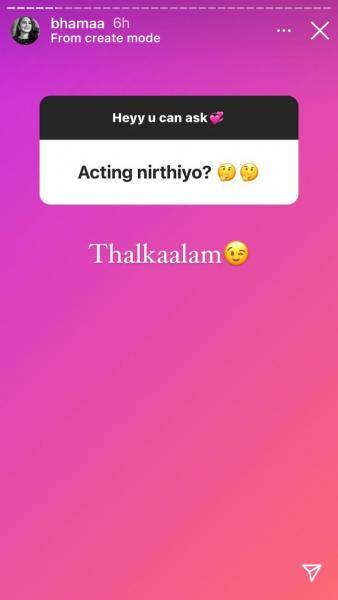 Bhama and Arun met each other through their families, with the latter completing his studies in Canada and is also incidentally her brother-in-law's classmate. The couple entered wedlock last year during the lockdown phase, with pictures from the grand three-day wedding going viral on social media.