Actor Karthik Raj is one of the most sensational personalities who has a phenomenal fan base on social media. The talented actor got his breakthrough after playing the lead role in Zee Tamil's serial, Sembaruthi. Karthik Raj essayed the role of Adhi, the lead protagonist. His impressive performance in the serial fetched him a good name and support among the audience. However, he quit the serial a few months before and the news about his exit created a huge buzz on social media. Karthik Raj's fans were highly disappointed about his exit from the show and people expressed their feelings through social media. It was revealed that Karthik Raj will no longer be a part of Sembaruthi serial due to a few undisclosed reasons.

Before Sembaruthi, Karthik Raj acted in Vijay TV's popular serials like Kanaa Kaanum Kaalangal: Kallooriyin Kadhai and Office. He has also acted in the lead role in films like 465 and Naalu Peruku Nalladhuna Edhuvum Thappilla. He was also seen playing the lead in the Tamil web series, Mugilan, which streamed on Zee 5 platform. Those who haven't watched the series yet can watch it on the said streaming platform. Mugilan showcases the rise and fall of an underground don and Karthik Raj's performance in the series received a good response. Karthik shared screen space with Bigg Boss sensation Ramya Pandian in the series. The fans are now eagerly looking forward to knowing about his next project.

While details regarding his next plan of action are yet to be known, the young actor took to his official Instagram page to make an important clarification. Karthik Raj posted on his official Instagram page that he is not available on any other social media platforms and asked people not to be misguided by fake profiles. Sharing his clarification note, actor Karthik Raj posted, "CAUTION! I am not on Facebook / Twitter or on any other social media platform, other than Instagram. Please don't follow fake accounts. Please report and take legal actions on fake accounts. Be matured / Stay safe".

Through this statement, Karthik has made it clear that he is available only on Instagram and not on any other social media forums. This clarification from Karthik Raj will now make people aware of the fake Twitter and Facebook accounts that function under his name. Check out the screenshot of Karthik Raj's clarification statement here: 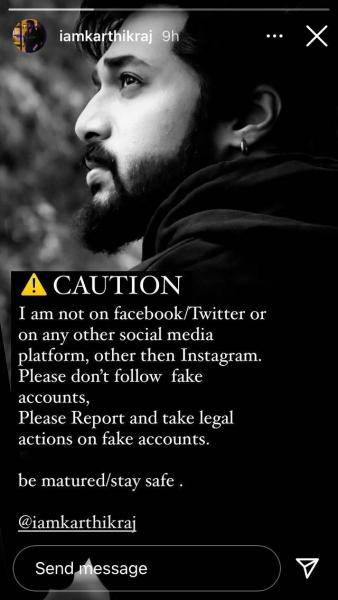