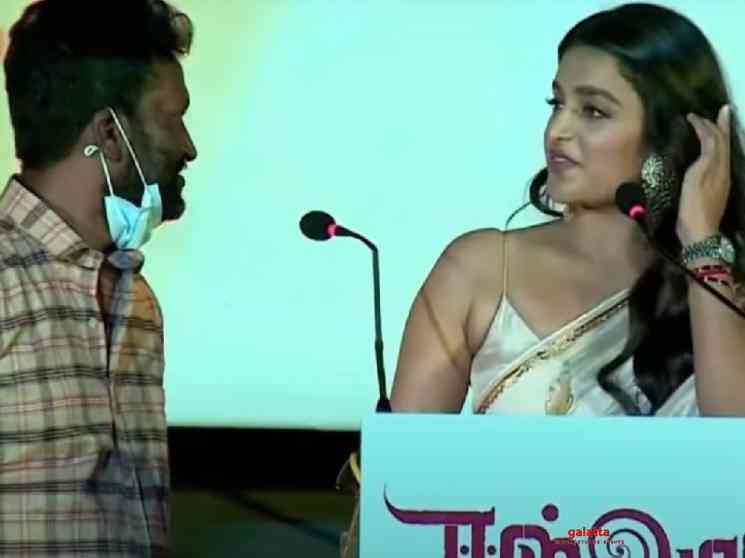 The audio launch of Silambarasan TR’s Eeswaran happened recently at Albert theatre in Chennai and the grand event witnessed the presence of the Eeswaran team members and hundreds of fans. Notably, the event marked Simbu’s first ever official public appearance after his transformation and everyone was so happy to see him in a new dimension. During the event, the film’s leading lady, Nidhhi Agerwal addressed the gathering and shared her experience about working in the film. Since she was not well versed in Tamil, director Susienthiran was present besides her to help with the translation. However, Susienthiran got excited because of the ambience and asked Nidhhi to talk about Simbu.

He addressed Nidhhi and said, “Tell Simbu mama, I love you”, and the video went viral on social media. Susienthiran’s action and words received a mixed response from the social media users who felt his actions were inappropriate. People also felt that Nidhhi’s face reactions looked uncomfortable when Susienthiran intervened in her speech. However, Susienthiran has now clarified through a video, stating that he mentioned ‘Simbu mama, I love you’, only in the context of the film’s story.

Talking in a video, Susienthiran said, “During the audio release function, I told something on a lighter note to Nidhhi, but it has been wrongly understood and this video is a clarification for that. In the film, Nidhhi plays a character that runs behind Simbu and she tells ‘I love you’ several times in the movie. But, Simbu will walk away from her and that is how their romantic portions are designed. I told those words only based on their characters, but it was wrongly understood by a lot of people,”.

Eeswaran is scheduled to have a grand release in the theatres on January 14, for the festive occasion of Pongal. Eeswaran and Master are expected to be the major trump cards for the revival of theatre business and let us see how the scenario turns out. Eeswaran is touted to be a family drama that will be high on emotions and action and it happens to be Simbu’s next release after Vantha Rajavathaan Varuven. The songs composed by Thaman S have received a very good reception from the fans and there are just ten days for the film’s release. The trailer of Eeswaran is also expected to release in the next few days. Stay tuned for more updates.